New Madden 18 Patch Out Now, Here's What It Does

A new update for the PS4 and Xbox One football game has landed.

The second major title update for Madden NFL 18 has arrived, making some big changes and adding new features. Starting with the new features, the single-player Longshot mode adds a feature that lets you replay gameplay moments to see them again. Additionally, you can now play full seasons with Madden Ultimate Team squads.

Another new feature is a monthly leaderboard for Madden Ultimate Team, so you can see how you compare to others on a monthly timeline.

As for gameplay changes, there are many. This update allows the quarterback to dive while scrambling, something that apparently wasn't possible before. The patch also addresses the much-talked about Gun Monster formation; specifically, this patch fixes the issue that could lead to pancake blocks by the O line in this formation. Additionally, the update fixes "exploit blitzes" for QB Contain players. What's more, the patch clears out a problem where the ref would spot the ball incorrectly after a flubbed punt.

The new Madden 18 patch also addresses "visual inaccuracies" with a number of players, including David Harris of the New England Patriots and free agent Colin Kaepernick. You can see the full patch notes below, as posted on EA's website. 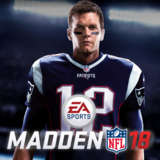