Nintendo's favorite plumber in green overalls finally gets a chance to shine in the Lego spotlight.

Nintendo's favorite handyman in green is officially joining his brother in the world of Lego. Following last year's Lego Super Mario line, Nintendo and Lego have announced Luigi's debut with the Lego Super Mario: Adventures with Luigi Starter Course. The confirmation comes after a recent update that had Lego Mario literally calling out for Luigi, which turned out to be a tease for the upcoming Luigi set.

Similar to the Adventures with Mario Starter Course, Luigi's 280-piece collection of plastic bricks will include all the parts needed to create an obstacle course and also features a Pink Yoshi, a Bone Goomba, and a Boom Boom for players to defeat. 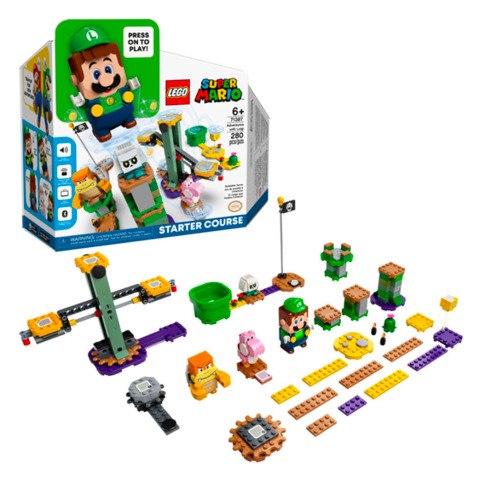 Preorders for the Lego Adventures with Luigi Starter Course are live now at the Lego Store, Best Buy, and Target, with orders shipping August 1. The Luigi set costs $60, the same price as the Mario starter course.

Luigi himself appears to function exactly the same as Mario, featuring an LCD screen on his chest and color sensors that can be used to create an interactive experience. There are cosmetic differences, though--aside from the obvious green overalls, Luigi also has different sound effects, character interaction sounds, and voice lines. Any of the previous Lego Super Mario sets you own will also be fully compatible with Luigi.

Check out the official Lego Luigi Starter Course announcement below. And if you're interested in picking up Lego Super Mario while you wait for the Luigi set to release, you can grab the Mario starter course for $48 at Amazon right now, down from $60.