New Legend of Heroes sequel out this July in Japan

Follow-up to Trails in the Sky is action RPG according to retail store leaks; slated for PSP.

While the rest of the new Legend of Heroes titles like Zero no Kiseki and Aoi no Kiseki have yet to surface in North American shores, Japan will be getting a new sequel to the Falcom-made series. The Legend of Heroes: Nayuta no Kiseki will be out for the PSP on July 26.

First details about the game appeared initially on the Japanese online portal for electronics store Bic Camera, but were pulled down. According to a cached listing found by Andriasang, the game will be an action RPG and will have a simple control scheme for initiating battles. Each party member will have access to sword skills, magic arts, and special abilities called "gear craft" as combat options.

Players can also freely change the in-game season that will affect battle conditions and dungeon maps. The season-changing mechanic will be the focal theme of Nayuta no Kiseki. Other notable features include customizable costumes and equipment and a new game plus option that opens different story paths and secret missions not available on the first playthrough.

In addition, Falcom announced bonus items for gamers who buy the first print run of the title. They will get an "Acoustic Live DVD Collection Falcom jdkTV" DVD featuring live music from in-house band jdk. Fans who preorder the game will get a case modeled after the in-game creature Shining Pom. Gamers who buy it from offline stores will get a mini soundtrack CD containing the game's music. The sleeve of the CD will have different art depending on the outlets players buy it from. 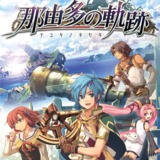 The Legend of Nayuta: Boundless Trails
Follow
$49.99 on Gamestop
Buy