Hot Wheels is releasing a new Mario Kart track based on the most iconic course in the racing franchise's long history: Rainbow Road. Mario Kart Rainbow Road Raceway releases this summer. While it was briefly live at Amazon last week, Hot Wheels told GameSpot that it was mistakenly made available for preorder. If you already preordered, you could just hang onto your order since Amazon doesn't charge until items ship.

Despite not being available to purchase at this time, the Amazon listing is still up and contains several pictures of the cool track, which you can see below. Amazon had listed the Rainbow Road Raceway at $120 with a May 29 release date. It's unclear at this time if those details are still accurate, though.

Rainbow Road has been a Mario Kart staple since Super Mario Kart. Ever since its debut, the final race in each Mario Kart game's Grand Prix has been a new take on the treacherous but colorful raceway. Hot Wheels' Rainbow Road set can be configured in multiple different layouts, including a fast-paced downhill sprint and a winding track filled with turns. Some of the multi-colored track pieces are wavy, giving the set a distinct look. 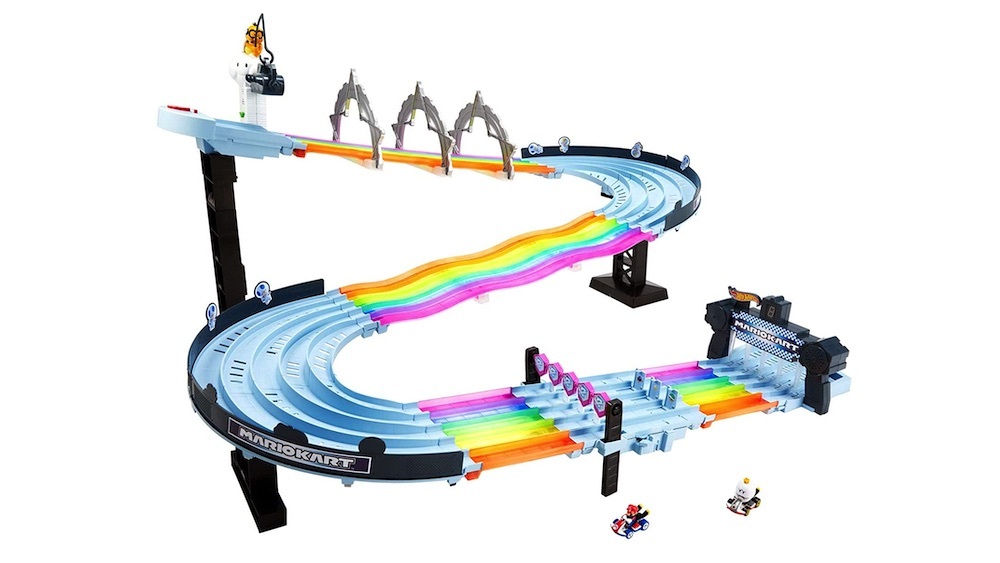 While the listing on Amazon doesn't have a full description, we can tell by the pictures that it comes with five racers: Mario, Luigi, Yoshi, Peach, and King Boo. Lakitu is positioned above the starting line to signal the start of the race, and it appears that you can press a button to trigger sound/lighting effects and unlock the gates. It requires three AAA batteries to operate.

Amazon lists the track dimensions as approximately 40 x 48 x 27 inches. This will change based on how you set up the track, but it will definitely require a decent-sized space.