Bandai announces Gundam vs. Zeta Gundam; game based on the popular Japanese franchise is coming this summer.

Bandai today announced that Mobile Suit Gundam: Gundam vs. Zeta Gundam will be coming to the PlayStation 2 this summer. This title is the latest in the prolific series of Gundam games that date back to the early '90s.

Gundam vs. Zeta Gundam takes place seven years after the One Year War. Although victorious, the Earth Federation succumbs to corruption, and the Titans' police force assumes absolute power. To overthrow the Titans, the heroes and enemies from the original Mobile Suit Gundam series must band together.

There will be 31 new mobile suits to operate, and each can transform into its mobile armor form. Gamers will be able to play on the side of good or evil as a member of the rebel A.E.U.G. or oppressive Titans. 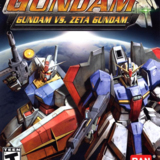