New Gundam game for the PS2

Bandai has revealed that it is currently developing Mobile Suit Gundam: Giren's Ambition for the PlayStation 2. The game, which bears the subtitle Chronicles of Zeon Independence War, is the latest installment in the popular Gundam-based strategy simulation series that began on the Sega Saturn in 1998. As always, the objective of the game is to win the One Year War as either the Earth Federation or the Principality of Zeon.

Mobile Suit Gundam: Giren's Ambition for the PlayStation 2 is scheduled for a spring release in Japan. 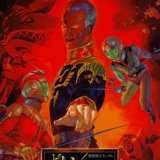