New Guilty Gear game to be released on Atomiswave hardware

Sammy will be bringing its fighter to a new arcade hardware platform.

According to the latest release of Arcadia magazine, Sammy will be displaying its next release in the Guilty Gear series at the upcoming 41st Amusement Machine Show (AM Show) in Japan. What is known about the game at the current time is that it will be released on Sammy's new Atomiswave system, it will be network compliant, and it will also use a special memory card, which has become a recent trend at arcades.

The Atomiswave is a Jamma-compatible cartridge-based system, equipped with a broadband cartridge and connection for additional external input devices. All of the upcoming titles for the Atomiswave announced by Sammy so far have been 3D, which means it's possible the new Guilty Gear title will be a 3D game as well.

A beta test for the new Guilty Gear title is scheduled to take place during August. The 41st Amusement Machine Show will take place in Japan's Tokyo Big Site from September 11 through September 13. 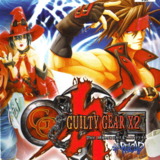