The long-awaited sequel to the smash hit action-platformer is coming this year.

The long-awaited sequel to the critically acclaimed Metroidvania Guacamelee is coming this year. A new trailer for Guacamelee 2 revealed the action-platformer is launching for PS4 and PC on August 21.

Guacamelee 2 continues where the first game left off, with luchador Juan Aguacate retired from supernatural adventuring, platforming, and brawling. That all changes when a new threat emerges, and Juan once again dons the luchador mask that gives him his vast array of powerful attacks.

Like its predecessor, Guacamelee 2 features four-player local co-op, and a vast array of colorful abilities that offer new strategies for movement and combat. The same style of electro-Mexican soundtrack is making its return too, as well as the vibrant color palette used for the graphics. The game promises the return of familiar faces from the original, both friendly and villainous.

However, there are a few changes this time around. Guacamelee 2 has twice as many different enemy types for Juan to smash, plus many more bosses. Juan will also unlock new abilities he can only use after he transforms into a chicken, instead of only finding new skills for his human form. He'll learn these new chicken abilities from some sort of Chicken Illuminati, seen dancing at the end of the trailer.

Fans of the original Guacamelee were surprised to hear its sequel would not be making its way to the PlayStation Vita. Guacamelee released on the Vita, PS3, and PC in 2013, before getting ported to Xbox 360, PS4, Wii U, and Xbox One the following year. Guacamelee 2 might copy its predecessor and eventually make its way to other platforms--like the Xbox One, Vita, or Nintendo Switch--at a later date. 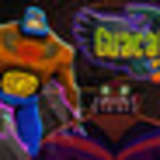