Grid Legends features live-action cutscenes that utilize Extended Reality, a similar tech to what was used to film The Mandalorian.

"It was a pleasure to work with Ncuti," Codemasters brand director John Merchant said in a press release. "His portrayal of Valentin Manzi has taken our story mode, Driven to Glory, to another level, and we know his followers will enjoy racing alongside him. Players will now understand what's needed to compete in the Grid World Series and it will take more than focus and a few good moves to win."

Grid Legends incorporates live-action cutscenes, a move that creative director Chris Smith said allows Codemasters to better capture the vision they have for the game's campaign. "When we talked to a lot of companies about the story and we had tests back from motion capture and digital--one of the people that we talked to proposed live-action with [Extended Reality]," Smith said at a preview event. "It was new technology that nobody had used before."

He continued: "They did some test shots for us and started talking to us and the early stuff just looked so good. And then we started casting and we ended up getting this amazing cast. We did look at animation but honestly the results from when we looked at live-action were better for telling the story we wanted to tell. And we wanted to tell a story that was worth telling. And I think you get that with real people."

Grid Legends will launch for Xbox Series X|S, Xbox One, PS5, PS4, and PC on February 25. The game sees the return of the Nemesis system from 2019's Grid, which allows you to forge rivalries with both AI-controlled characters and other players. 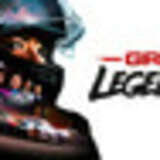