New Far East of Eden Title announced for the GBA

Hudson is working on a new RPG for Nintendo's handheld.

Oriental Blue: Ao no Tengai will be the first game in the series without a fixed name and personality for the main character. The player can chose between a 16-year-old boy and a 16-year-old girl, whose changeable names are Tenran and Aoi, respectively.

While Oriental Blue does have a basic storyline, the game is based on a free scenario system that allows the player to choose where to go and what to do. Oriental Blue also has a diary system that keeps records of past events from the viewpoint of the main character. There are a number of different diary entries in the game, and they can be traded between players using a GBA link cable. In terms of the battle system, there are magical stones in Oriental Blue that can be used individually to cast a spell or combined with another magical stone to create an even stronger spell. The magical stones can also be traded with other players using a link cable.

According to series producer Ouji Hiroi, Oriental Blue's production was frozen six years ago due to issues involving the cost of development for the Nintendo 64, although its scenario was already written. Hiroi later discovered that the Far East of Eden staff at Hudson had secretively been developing the game for release on the Game Boy Advance. According to Hiroi's original plans, the Far East of Eden series was to consist of nine chapters, with Oriental Blue being the seventh. While the game will lack voices due to the limitations of the GBA hardware, Hiroi hopes to possibly release another title named Oriental Red in the future that will adopt the use of voices.

Oriental Blue: Ao no Tengai is nearing completion at Hudson, and it is scheduled for release in October in Japan by Nintendo. 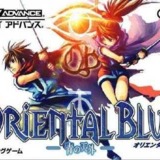