The next game in Visual Concept's football series will feature a first-person mode.

Visual Concepts has revealed that the next game in its ESPN NFL Football series will feature a first-person mode in which players will be able to view the action from the perspective of a player on the field. In addition, the audio and visual effects in the game will change depending on which position the first-person mode is focusing on--for example, quarterbacks can hear the footsteps of defensive players closing in for the sack, as well as the thud of bodies hitting the ground.

"Our fans have been asking us to find ways they can get even more involved in the game," said Greg Thomas, president of Visual Concepts Entertainment. "We've put considerable resources behind this revolutionary feature and created a game mode that allows you to become any player on the field and experience the game just as they do every time they hit the field."

"This is a truly exciting new feature for sports fans, and we're excited to bring it to them and to the gaming community," said Rick Alessandri, senior vice president and general manager, ESPN Enterprises. "ESPN has always been about serving the fans, and these games will really make them part of the action."

ESPN NFL Football is scheduled for release this September on the PlayStation 2 and Xbox. 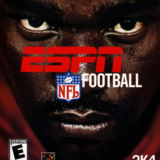