While quirky developer Double Fine was folded into Microsoft's Xbox Game Studios in June 2019, the company is still publishing the action-adventure, coming-of-age romp Knights and Bikes. Foam Sword, composed of former Media Molecule developers, has revealed that its hand-painted adventure game will launch on PC and PlayStation 4 on August 27.

The developer took to Twitter to announce that Knights and Bikes has gone gold, an industry phrase meaning the game has passed various forms of certification, making it officially ready for printing and distribution. Along with the announcement, Foam Sword shared a funny GIF revealing the game's release date.

BIG REVEAL! Knights And Bikes has gone GOLD & will be released on... well, we'll let Captain Honkers do the honours!
Our hand-painted Goonies inspired adventure will launch on PS4 & Steam (PC/MAC/LINUX)?Wishlist: https://t.co/1ReWP7DdPt
Who are you gonna co-op it with?! ??‍♀️??‍♂️ pic.twitter.com/AWYjzjvkI1

Knights and Bikes started as a Kickstarter project in February 2016, raking in more than £100,000 GBP ($121,000 USD) within a few weeks to get development off the ground. The official release date announcement comes more than two years after Knights and Bikes' expected April 2017 release window.

The game takes place on a British island in the 1980s, with you (and a friend) controlling two friends as they search for exciting and dangerous treasure. Knights and Bikes is billed as a Goonies-inspired, Secret of Mana-esque coming-of-age story where the friends's bikes are upgradeable. According to Foam Sword, Knights and Bikes was developed with "co-op in mind (although you can still play it single player thanks to some clever AI and by switching between the characters with the shoulder-buttons on the controller)." 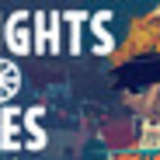