Nintendo gives us a closer look at the 3DS's big summer releases.

Nintendo recently held a preview event in New York where the company demonstrated the side-scrolling Pikmin spin-off Hey! Pikmin along with the Mii-based RPG Miitopia, providing us with some new information about the upcoming 3DS titles.

The hands-on demo of Hey! Pikmin gave us our first glimpse at a new home base area in the game dubbed Pikmin Park. Rather than taking the Pikmin you've amassed with you into subsequent levels, the plant-like minions are deposited in Pikmin Park after each stage. Here you can deploy them to different sections of the park that are littered with elemental hazards (such as electrical wires), which the Pikmin will gradually clear out while you're exploring other levels. The amount of time it takes to clear an area of Pikmin Park depends on the amount of Pikmin you have stored there, so the more you assemble, the faster they can complete their tasks.

You can also expedite the process by using the new Pikmin Amiibo that releases alongside the title. Tapping the figure adds more Pikmin to your Pikmin Park, though it’s unclear if the Amiibo will serve an additional purpose or if the title will be compatible with other figures, such as the Olimar Amiibo from the Super Smash Bros. line.

Miitopia, meanwhile, has largely been a mystery ever since the game was first unveiled last November in a Japanese Nintendo Direct. The footage showcased during the broadcast drew comparisons to the quirky 3DS life sim Tomodachi Life. These similarities weren't coincidental; Miitopia is being developed by the team responsible for Tomodachi Life, and the premise in both is to populate your game with your collection of Miis and witness them humorously interact and form bonds with each other.

Like the 3DS’s "built-in" StreetPass game Find Mii, Miitopia is a simplified take on RPGs in which your Miis are cast in the roles of your party members. Each Mii is assigned a class, from traditional RPG jobs like Knight and Thief to more off-beat ones like Cook and Pop Idol. The Miis behave according to the personality you set for them; a cautious Mii, for instance, will favor using stat-buffing abilities. In between battles, Miis are lodged at inns, where you can witness interactions between them (which will increase their bond and in turn unlock new skills), feed them to improve their stats, and send them off to purchase new weapons. Up to four Miis can be in your party at a time, though the Nintendo reps at the event have said that players can recruit more than eight Miis.

If you don't have an extensive collection of Miis to use, Nintendo is also launching an online service called Mii Central from which you can download other players' creations and bring into your game. It was unclear if the service will be exclusive to Miitopia or if you'll be able to keep the Miis you download to use in other titles.

Miitopia also features Amiibo support. Scanning a figure will give you a "game ticket," which can be redeemed to play one of the title’s minigames. Nintendo hasn’t specified which Amiibo will be compatible with the title or if they’ll have any additional functionality.

Both Miitopia and Hey! Pikmin will release on July 28, the same day that the newest addition to the 3DS line of handhelds, the New Nintendo 2DS XL, launches in the US. Nintendo is marketing the New 2DS XL as an entry-level console in between the lower-end 2DS model and the New 3DS XL, featuring the same hardware as the latter but without its ability to display stereoscopic 3D effects. The New 2DS XL retails for $150.

You can check out 10 minutes of Miitopia footage to get a better idea of its quirky gameplay. We also have new gameplay footage of Ever Oasis, the upcoming action RPG from the creator of the Mana series, which launches for the 3DS on June 23. 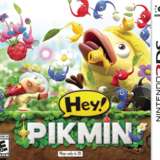