TOKYO--Namco has launched its official site for the PSP edition of Namco Museum, shedding some light on the collection's featured options and game modes. The collection is slated for release in Japan on February 24 at a price of 3,800 yen ($37).

As we reported earlier, Namco Museum for the PSP will include classic arcade hits from the 1980s and late 1970s, including Pac-Man, Ms. Pac-Man, Galaga, Galaxian, Dig-Dug, Rally-X, and New Rally-X. With five of the games (Pac-Man, Ms. Pac-Man, Galaga, Galaxian, and Dig-Dug), you'll be given the option to play on a vertical screen by holding the PSP sideways, which gives the games an arcadelike feel.

Four of the included titles, Pac-Man, Galaga, New Rally-X, and Dig-Dug, come with new modes that take advantage of the PSP's hardware. Pac-Man has updated graphics, but its basic rules are the same as the classic edition. There are a few twists to spice up the gameplay, however. As a result, surprises come in each stage, and there are boss stages where you go one-on-one against a huge ghost. In cooperation mode, you and a friend will help each other get through the game. If you are touched by a ghost, you'll be able to resurrect at the next stage...as long as your partner makes it there.

Galaga features background graphics that show your progress while traveling from Earth to planet Galaga. You'll fight against bosses between phases, which represents another new addition to the game. In multiplayer mode, you can compete to see who goes through the game the fastest. Up to four players can compete against one another, and the game also features a way to obstruct your opponents so you can retake the lead.

New Rally-X features a 3D course that presents some new features, like an overhead crossing or a jumping board. In two-player mode, you compete with another player by collecting as many flags as you can on the same map. You can snatch flags from opponents by shooting smoke screens at them, which makes them spin and drop their flags, a key point to winning the game.

The gameplay in the Namco Museum edition of Dig-Dug is identical to the original, but it features redrawn graphics, which includes the soil. This time the soil comes in a variety of colors. You can cooperate with a friend in the two-player mode, but you'll have to be careful, because you can harpoon other players as though they were one of your enemies, or you can crush them with a loose stone. 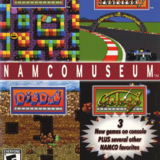