Crossy Road Castle is a local-multiplayer platformer that will support up to four players across multiple devices.

Hipster Whale, the Melbourne-based studio behind the 2014 iOS hit Crossy Road, today revealed their next project: a multiplayer 2D platformer that will be exclusive to Apple Arcade. Crossy Road Castle sees the familiar cast of animal characters in a completely different scenario as they traverse up an endless castle tower with no roads or cars in sight.

Crossy Road Castle supports up to 4 players locally and takes advantage of Apple Arcade's PS4 and Xbox controller support, as well as multi-device functionality. That means you can play together by using any combination of the devices compatible with Apple Arcade, including iPhones, iPads, iPod touches, Mac computers, and Apple TVs. The arrangement of rooms in the game's endless towers will be randomly generated, but will cater to the number of players present--you can play the game solo, and you won't be served any rooms that require cooperation to overcome. It will also feature boss fights, including one against the infamous eagle from Crossy Road.

Previous games made by Hipster Whale, including Crossy Road, Pac-Man 256, Disney Crossy Road, and Shooty Skies, were all free-to-play games that featured both regular advertisements and optional in-app purchases. Crossy Road Castle, however, as with all Apple Arcade games, will not feature either. GameSpot had a chance to speak to the co-founder of Hipster Whale, Matt Hall, about their shift into the Apple Arcade business model.

GameSpot: Hipster Whale is already a proven success story on the App Store (Crossy Road won an Apple Design Award in 2015, and reportedly earned over $10 million in the first three months). Why did you partner with Apple Arcade for this project?

Matt Hall: With Crossy Road we had a really big success and we were super fortunate--it's not like we had made lots of games prior to that. But after Crossy Road, everything sort of changes for us. We don't have to do work for hire, we just make the things we're interested in. When Namco came up and said:" Would you like to make the new Pac Man?" We were like, "Hell yes!" And there was a super exciting opportunity making Disney Crossy Road which was a really interesting challenge as well, where we managed to make Crossy Road a better game. And so when Apple Arcade opportunity came up it was just an exciting opportunity to make something completely new, not have to worry about the constraints of monetisation, and just make something fun that everyone's going to be able to play.

I've noticed that your games to date have all been free to play--why is that?

I started experimenting with free to play fairly early, but back in the early days of App Store, you had a free version and a pro version, right? There was no opportunity to do in-app purchases early on. I really liked making my games for free, because it meant at least 10 times as many people were going to play it. Like, that was key for me.

And that's something that putting a premium on your games limits you in?

Yeah, that's right. Like, okay, you're going to get paid. But fewer people want to pay for games, because you have to convince someone that this game is for them through icon, blurb, screenshots. Apple Arcade is going to be really interesting for that, because it's going to be easier for games that can't market themselves in a single line. You know. Like, using the example of Sayonara Wild Hearts, like okay, so it's a video game with an all-female motorcycle club and you... dance to music? Is that the marketing pitch? It's very difficult to explain, but you can just get it, and the moment you see it and play it you go: "Oh okay, yeah" and so that's what Apple Arcade opens up.

So you think Apple Arcade is a sustainable business model for new, up-and-coming developers?

I'm really looking forward to seeing how it goes. The only thing that never changes that everything changes, so we just got to see, right? We were really excited about the way it was described to us, and we think it's a great opportunity for many developers, particularly Australian developers.

Having used Apple Arcade for a while, is there anything that you can identify that would be that would help improve the experience for developers?

Probably the key one for me is: the controller support is so new, and there are a huge number of people out there that are totally comfortable playing games with controllers. But at the moment, especially on Apple TV, it's difficult to see which games are 'controller-first' and which games aren't, and that could be solved with something a simple as a filter, or, you know, just something that says "these are the best controller games for Apple TV", and I think that would massively change that platform in particular.

The announcement of Crossy Road Castle comes during Melbourne International Games Week, and just before the commencement of PAX Aus. Other Australian games featured on Apple Arcade include the upcoming visual novel Necrobarista, puzzle-platformer Projection: Last Light, and the adorable Fledgling Heroes. 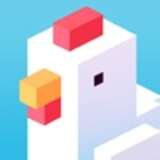