CrossfireX releases later this year on Xbox One and Xbox Series X.

CrossfireX, the console version of the massive PC first-person shooter, is coming to Xbox first in 2020. The game features a cinematic campaign created by Remedy, the team behind Control and Alan Wake.

CrossfireX was shown during the Xbox first-party games showcase today, alongside Halo Infinite and many others. The trailer gave us a look at the action-packed single-player campaign, though story details are light as of now.

The large-scale co-op multiplayer mode will be free-to-play with an Xbox Live Gold subscription. The single player campaign by Remedy, however, will require a separate purchase.

Crossfire is one of the biggest multiplayer games on the market, with more than 650 million registered users on PC worldwide. The game was first shown off at Microsoft's E3 press conference in 2019 and had an open beta on Xbox One last month. An official release date hasn't been announced, but CrossfireX will arrive on Xbox One and Xbox Series X later this year. 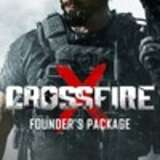