The latest trailer for the upcoming Switch RPG shows off its signature Brave and Default mechanics.

Bravely Default II launches on Nintendo Switch in a little over a week. Ahead of the game's release, Nintendo and Square Enix have shared a new trailer that provides another overview of its unique battle system.

Like many classical JRPGs, Bravely Default II features turn-based combat, but it weaves in an extra layer of strategy with its titular Brave and Default mechanics. Selecting Default makes your character assume a defensive stance, forgoing their turn to amass one Brave Point. The Brave command, meanwhile, lets you use Brave Points to perform multiple actions in a single turn. As the new trailer explains, carefully utilizing both the Brave and Default commands will be vital to defeating many of the game's tougher adversaries.

Despite the number in its title, Bravely Default II is actually the third proper entry in its series. This installment follows four new "heroes of light"--Seth the sailor, Gloria the princess, Adele the mercenary, and Elvis the scholar--as they set out on an adventure across the continent of Excillant to restore the magical Crystals. The game was originally slated to release in 2020 but was pushed back to further fine-tune the experience.

If you're interested in trying the title out ahead of its release, a free demo of the game is available on the Nintendo eShop. The demo takes place partway through the story and lets you tinker around with several different job classes. As an added bonus, you'll get 100 My Nintendo Platinum Points if you download the demo before Bravely Default II launches. 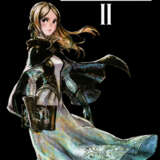