Activision has launched a new Web site for Star Trek Away Team, its upcoming strategy game that focuses on squad-based tactical combat. The new site features profiles of the characters found in the game, news updates, downloads, and a description of the background story. The game takes place in the Star Trek: The Next Generation setting, and it features a variety of environments, including a Borg cube, the interior of a Romulan warbird, the Klingon homeworld, and many others. Players assume command of a small group of characters who all have a different set of skills, including medical, engineering, science, and security. Each character must be used effectively in order to complete the various missions. 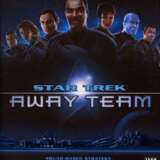