The new, as-yet-unnamed expansion pack will revamp the game's Turbine Engine, doubling the original texture size without impacting performance on low-end machines. Turbine is also touting the packs' new strategic-resource and land-control systems, which will encourage players to compete for higher-level skills and town ownership.

Of course, what would an expansion pack be without new stories and monsters as well. "This expansion is a great way to say 'thank you' to all of the Asheron's players. They are the reason that AC will remain a popular and exciting online role playing game for a long time to come," said Turbine president and CEO Jeff Anderson.

The Asheron's Call expansion pack will be the first title to be entirely self-published by Boston-based Turbine. The Asheron's Call franchise had been published by Microsoft until late last year when Turbine bought the license back from Microsoft. Development of the new game will be handled out of the company's brand-new Santa Monica studio.

We spoke with the franchise's executive producer, Jessica Mulligan, who gave us the skinny on what went into the company's decision to support the game with an additional expansion pack.

GameSpot: Thanks for speaking with us Jessica. In the interest of setting the scene, where does the game stand currently: How many active subscribers?

Jessica Mulligan: As a general policy, we don’t release subscription figures, however, we still have quite a large, dedicated following and the game continues to grow. Officially, the original Asheron’s Call is distributed only in the US, but we have players who log in from nations all around the world. Some of those countries include China, Korea, Britain, France, Germany, Norway, Brazil, Argentina… pretty much from everywhere. Our biggest market is still the US.

GS: Has Turbine yet assumed full control and responsibility of the title?

JM: We have assumed control of everything except Billing and Account Management. Microsoft continues to perform those functions while we build out our own solution. We expect to migrate those over to Turbine in late summer.

GS: Jessica, what role do you play at Turbine, and on this upcoming expansion pack specifically?

JM: I am one of three Executive Producers at Turbine, and my primary responsibility is for the P&L of the Asheron’s Call franchise. On the expansion pack, I am also the Creative Director, in charge of the making the final decisions on the direction the project will take and what features will make it into the release.

GS: How long does Turbine intend to support the AC1 community? Does there come a time when that support interferes with the creation of new IP/new games at Turbine?

JM: We’ll support AC1 as long as the players continue to have a good time and support the game. It is kind of a ‘chicken and egg’ situation; we do our best to listen to the players and provide the features and content that keep them playing. As long as we’re successful, they’ll stick around and we’ll keep supporting the game. At no time does any other IP figure into whether we keep offering AC1; in the end, the players decide that.

GS: You've worked on a number of MMORPG titles, including Ultima Online. Can you briefly outline your personal history in the MMO space in terms of games worked on?

GS: What do you think it is about AC that has given it such legs in the MMORPG space? What differentiates it from other, less successful PSW games?

JM: A number of things differentiate AC1 from other MMORPGs. For one, the game’s Allegiance guild system is unique and encourages ‘elder’ players to contact new players as they join the game, bring them into the fold and help them advance. That is a powerful thing for new players; they don’t have to try to learn it all on their own if they don’t want to, and it helps build very strong, long-lasting and cooperative communities at all levels of play. Secondly, we’re the only MMORPG that does monthly content updates as part of the regular schedule. Our competitors develop one or two expansion packs a year and sell them; we give away that content for free on a monthly basis. Over the last 4 ½ years, our players have enjoyed the equivalent of several expansion packs without having to pay extra for them. We save retail expansion packs for the really large additions and updates, such as housing or, in the case of the one we just announced, a significant graphics upgrade. Third, the community itself is a differentiator. The players really drive what we do with the game; they are the ‘fun factor’ around which we build our content. Our AC1 player base is a very vocal, loyal community; we’re just the slaves in charge of making sure they have a good time.

GS: What are the key elements of making a successful MMORPG today?

JM: If my competitors don’t already know the key elements of a good MMORPG, I’m not telling them here! In terms of the entire game service: the customer service aspects are the key feature for making certain players get help when they need it--and that a level playing field is maintained by finding and scotching cheaters, exploiters or anyone who would make it more difficult or impossible for the average player to enjoy the game. Since we took over the service on March 1, we’ve made great strides there. We’re answering almost all in-game help calls in less than 10 minutes and, on average, much quicker than that, which is an order of magnitude faster than most games answer them. We’ve also made it a priority to find and stop exploiters--those who harass other players, grief players and unattended combat macroers. That is starting to have some good effect; we’re getting fewer calls on harassment and UCMs as we find and ban habitual abusers, for example.

GS: Who is responsible for the additional story elements in the expansion pack? Original team members?

JM: The current AC1 Live Team is responsible for designing the main story elements in the expansion pack. The expansion pack team will take that story and design content around it, and the Live Team will have input on that content on an ongoing basis.

GS: How will gamers access the game? What will it cost? Will it be marketed to newbies (IOW, will the original game be packed when the exp. pack is distributed) ?

JM: The expansion pack will be available at retail when it launches, but the price is TBD. However, we intend to keep the price reasonable and in-line with the cost of other retail expansion packs. And yes, we’ll bundle the current game into that package, so new players won’t have to buy two packages just to access the game. We are definitely looking to not only provide value to our current players, but attract new players to the game, too.

JM: This one was easy; we haven’t had a retail expansion for AC1 in more than two years now, and it was time. The green light was basically me saying to the CEO, “Hey, we’re going to do an expansion pack,” and him replying “Damn right you are!”

GS: How many Turbine staff will be assigned to the project?

JM: The staff count will certainly shift about during the development period. For example, at some point we’ll need a lot of artwork and that will require a number of artists, but they’ll come and go from the project as needed. But between the development staff in LA, the Live Team (who will do some work on the expansion pack) and our Technology and Support Services (software) team--plus some contractors--we’ll certainly have a lot of people working on various bits and pieces at any one time.

GS: Can you tell me what the current status is of the West Coast studio? How many staffers call the Santa Monica studio home?

JM: I’ll let [LA studio head] Jason Bell answer those questions. It just started up, but we’re ramping up quickly. I’m doing a lot of interviewing each week for the staff there, for example.

GS: Of the upcoming MMORPGS in the pipeline, which one or ones are you and Turbine staffers most curious about?

JM: I think we’re all curious about World of Warcraft.

GS: From left field…What's to prevent AC1 and AC2 players from some day mingling together in the same world?

JM: A number of things, actually. They are two completely different games, with styles that appeal to different kinds of players. The technology difference would be hard to bridge, too; AC’s technology is so different, coming from 1999, that I don’t think I would attempt to join the two worlds without a major overhaul of AC1. It would be tough to reconcile the two game designs, as well. I’m not saying it couldn’t happen some day, but we aren’t planning on it. 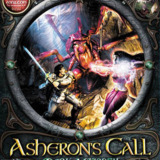