Publisher Lightning Games estimates that Anno: Mutationem will take about 12 hours to complete.

Developer ThinkingStars and publisher Lightning Games have released a new trailer for Anno: Mutationem, an upcoming action-adventure RPG with an incredible-looking pixelated graphic style that mixes together 2D and 3D visuals. The trailer reveals that the game is launching for PS5, PS4, and PC on March 17.

In Anno, you play as Ann Flores, a badass mercenary type who teams with her hacker buddy Ayane in search of her brother in a corporate-run, cyberpunk-inspired city. The game's biggest draw is its pixelated aesthetic, though its stylish combo-driven combat system also looks pretty cool. When you're not fighting, you can tackle side quests and chat with other characters via a dialogue tree.

In a press release, Lightning Games writes that Anno will feature English, Japanese, and Chinese voice over. The publisher estimates that the game will take about 12 hours to beat.

If you're looking for more indie games to play this year, check out GameSpot's list of 27 games you shouldn't overlook in 2022. The year seems to be a big one for cyberpunk-inspired and futuristic dystopian settings--alongside Anno, we're also scheduled to get games like Citizen Sleeper and Replaced in 2022. 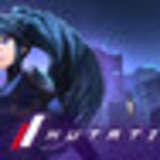