Comments
GameSpot has received from EON Digital Entertainment new screenshots and a trailer showcasing gameplay of its upcoming flight simulator, Airfix Dogfighter. Based on the popular series of model planes, Airfix Dogfighter lets you take control of 17 Airfix model aircraft used by the Axis and Allied powers of World War II. Gameplay spans more than 20 levels and largely consists of dogfighting and bombing raids. Airfix Dogfighter is due out this month. 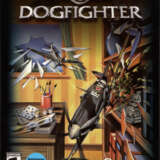