Netflix Is Bringing Moonlighter Back To Mobile Devices

The 2018 console and PC action game did have an iOS release in 2020, but it was pulled offline and is now re-releasing with Neftlix's help.

Moonlighter is a well-regarded PlayStation 4 and PC action game about collecting inventory by braving deadly dungeons and selling them in your store back in town. The game was a success and had follow-up releases on Xbox and Switch. It also released on iOS and Android devices with updated touch-screen controls in 2020, but was pulled offline.

In a post on the iOS games subreddit asking about why it was pulled offline a few months ago publisher 11 Bit Studios wrote, "Moonlighter has been taken down from both mobile stores: Google Play and App Store. While we are working on a different distribution model, the game won't be available for purchasing at these stores anymore. However, on the accounts that the game has been purchased for, it will be further available. That said, the players who bought the game, are still going to have it, enjoy, and fight monsters in the dungeons to get loot and sell it for monies. Thank you."

It turns out that, "different distribution model," is a partnership with Netflix. The online streaming service announced a handful of new games it is publishing for mobile devices and among them is the mobile version of Moonlighter. For its original mobile release, it was available as a paid game, but through Netflix the game will be available without ads or in-app purchases.

Moonlighter is available today on mobile devices and the way the Netflix partnership of this whole thing works is if you log into the Netflix mobile app you will find a dedicated row of games among Netflix’s various video offerings. On that row you'll see Moonlighter, and when you tap the game, it will install it. From there you can access the game from inside the Netflix app, or you can access it directly from your home screen.

Moonlighter is not the only Netflix mobile game released today. Netflix also released Dragon Up, Townsmen - A Kingdom Rebuilt, and announced that Exploding Kittens - The Game will be releasing on May 31. 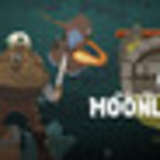