Eidos and Arkedo demonstrate that knocking down walls using balls isn't nearly as uncomplicated as it used to be in this innovative arcade-style DS game.

Scheduled for release later this month, Nervous Brickdown is a collection of Breakout/Arkanoid-style games that are played exclusively with the Nintendo DS's stylus and touch screen. The paddle, ball, and bricks gameplay that Nervous Brickdown takes its inspiration from has been done to death, but the upcoming game manages to make it feel fresh with interesting new gameplay mechanics, as well as a number of quirky art styles. Nervous Brickdown also features no fewer than 135 levels all told. After having recently had an opportunity to play through a good number of them, we're pleased to report that they're incredibly varied and a lot of fun.

In the near-finished build of Nervous Brickdown that we've been playing, one of the gameplay options on the main menu is grayed out, which either means that it's unlockable or simply not present in our version. But we've had access to both the arcade and single-cart multiplayer modes, and although volunteers to join in the two-player games have been plentiful, we've spent the most time playing the single-player arcade mode. The arcade mode tasks you with progressing through 10 differently themed worlds, with such names as Pow, Paper, Ghost, Water, Speed, Switch, Shoot, Curve, and Retro. Those names give a reasonably good idea of the kind of levels that are waiting for you in each world, but they certainly don't tell the whole story.

One of our favorite worlds to play in right now is Paper, not only because you get to draw your own paddle, but also because its goals are uncomplicated yet challenging. The premise of the Paper levels is that the top screen is covered with ink blots (think of them as the bricks), and to remove them, you need to hit them with your ball several times. The catch is that the ink keeps spreading, so any ink blot that you've knocked down to a relatively small size but then fail to hit for a while will grow back. The levels take place on what appears to be a tabletop, so before you can get to the ink blots, you'll occasionally have to use your ball to knock other objects out of the way first. Dripping paint that isn't allowed to reach the bottom of the screen adds a sense of urgency during later levels, and the Paper boss is arguably the best one that we've fought to date.

Another office favorite right now is the Water world, in which your paddle is replaced with a submarine. While using your ball to destroy bricks, you'll also have to rescue stranded sailors who are standing on platforms above the water by knocking them off the platforms and then using your submarine paddle to bounce them onto the relative safety of a small island. As if that weren't enough to keep you busy, you'll also have to keep an eye out for man-eating sharks, which can be killed simply by tapping them with the stylus as they swim across the touch screen.

We could go on and on about some of the ways in which developer Arkedo has ingeniously reworked a classic gameplay mechanic. But to be honest, part of the fun comes from discovering them for yourself, and in many cases, figuring out how to unlock their secrets. There are levels on which you can blow the microphone to move the ball or the bricks; there are levels where it's the stylus rather than the ball that you use to destroy the bricks; and there are even levels on which you're required to change your paddle's color so that it matches that of the ball. Incidentally, the color-changing mechanic is also a feature of the cooperative multiplayer game, in which each player has a different colored paddle and the ball is always the color of the last brick that it hit.

If there's one thing that we're a little disappointed with in Nervous Brickdown, it's that all of the levels have to be played with the stylus. It's true that your paddle isn't always limited to moving just left or right, but on the levels where it is, it'd be great if there were at least an option to play using the D pad or shoulder buttons. Look for a full review of Nervous Brickdown soon. 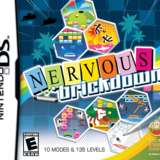