Sony is bringing the popular virtual pet Web site's cuddly critters to its console and portable.

Back in 2003, Sony announced it was making Neopets: The Darkest Faerie, a PlayStation game based on the popular, Pokemon-esque Neopets.com virtual pet Web site. However, shortly after its announcement, the game was canceled and thought gone forever.

No longer. Today, Sony Computer Entertainment America announced that Neopets: The Darkest Faerie is back--this time for the PlayStation 2. The game is set to ship in August 2005, and has no rating as of yet, although Sony said it is intended for "all ages."

The PS2 Neopets: The Darkest Faerie sounds much the same as the canceled PlayStation version. The 3D action adventure will follow two protagonists--the lupine knight Tormund or the genielike sorceress Roberta--as they journey through the realm of Neopia. The game begins as the pair goes forth on a quest to stop the Darkest Faerie, a malevolent being which threatens the very existence of Neopia. Along the way they must do battle with marginally less-cute creatures up to no good.

In addition to the PS2 game, Sony is also readying a Neopets title for the PSP. Called Neopets Petpet Adventure: The Wand of Wishing, it will follow another pair of Neopets as they discover the hidden realm of Petpet World. According to SCEA, it will be a third-person action adventure with four different playable characters, and it will be available in winter 2005. 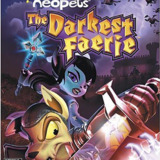