Calling Nekro "interesting" damns DarkForge Games' role-playing game with faint praise. But that's where I'm stuck with this dark and bloody hybrid of Diablo-styled role-playing and tactical real-time strategy combat, which is more experimental than inspired. Borrowing a little from column A and a little from column B has resulted in a game without a strong identity, at least in its current beta build available as an early access release via Steam. Kill-'em-all level monotony, a lack of combat depth that sees you do a lot more clicking than strategizing, and often-outrageous difficulty make for a passenger-seat experience that has you constantly wondering if you're there yet.

Where Nekro differs from the usual Diablo clone is in its personality. Instead of playing a studly warrior or a powerhouse wizard, you step into the presumably long curly slippers of a nekromancer who's far better at co-opting the dead into work gangs than doing his own dirty deeds. While there is a fair bit of melee combat, and the game maintains a frantic pace through each of the eight levels on offer in the current build, you also have to build small armies and take into account battle tactics through the ability to set up magical turrets and traps.

The game's structure is simplistic, if effective. There are three classes to choose from at the start of play, including the skull-throwing grim keeper, the healing alchemist, and the scrappy outcast (two more are noted to be coming soon on the character choice screen). There are few differences between the members of this ghoul gallery. Basic stats are stripped down to health, damage, and blood. While the first two should be self-explanatory, blood is a little different. The red stuff ties in to the grim theme of the game, although it functions just like mana and powers your arcane abilities. Kill a farmer or a lumberjack or even a cow or some other barnyard animal, and the corpse left behind can either be consumed to boost your health and blood scores or used as part of a summons to call up the diabolical creatures mentioned above.

Character customization is provided through spending experience points called sins on summons (think of them as spells), laid out in a linked tree. You first buy the main summons--for example, something like horror, which allows you to call demon bats out of thin air or out of any convenient corpse just lying around. Then you trick it out with boosted damage, regeneration, and other buffs. There are a limited number of options right now. Expect more summons in future builds, but at present, you generally choose between calling up mobile creatures to serve as your army of the night, such as those bats, and creating deadly traps like the darkseed turrets that look like refugees from Little Shop of Horrors.

As a result, combat takes place at arm's length, at least in part. Your nekromancer gleefully murders enemies with his summoned creatures and traps, as well as with his default attacks (the grim keeper tosses exploding skulls, the alchemist fires a laser-like blast, and the outcast hauls foes up close Scorpion-style with a chain and hook) and the scourge ranged assault that each satanic antihero can employ to blast baddies or even animate level scenery like jack-o'-lanterns and piles of bones. Trinkets discovered during levels provide additional boosts. They work something like magical gear in traditional role-playing games; you have four inventory slots with which to stock goodies like the blood-producing blood gem and the vial of goo that can slow down enemies.

But combat in Nekro comes off better on paper than it does in reality. Right now, the game is too daunting. I had an awful time getting through levels due to extreme difficulty and some unbalanced foes. Enemies can be wildly powerful, even the common shotgun-wielding witchers, who do too much damage in the early levels. Bosses are brutal. They come loaded with hundreds of hit points and gangs of powerhouse allies.

With that said, thinking tactically can get you through. Conjure up the right allies, lay out traps to turn sections of levels into killing fields, and you have a shot at survival. Spend sins in a smart manner between levels, and you work wonders. My demon bats from the horror summon, for instance, were nearly worthless early on against tough enemies like the blacksmith-look-alike elite townies, but they became a fairly effective force after I upgraded their damage, opened up the possibility of their respawning after death, and set it up so they funneled damage done to enemies to my own health. Figuring out how to wear down enemy mobs with the rather disgustingly named if extremely effective meat mouth summons also helped.

Yet even when I managed to come up with a smart battle plan, Nekro still overloaded me. Almost every significant battle concluded with me running away in panic. I would start off thinking that I had the upper hand, with a cloud of demonic allies swarming my foes, and turrets and/or traps all ready to go as well. Then my buddies would get massacred and my turrets destroyed. Then I would flee, flinging ranged weapons over my shoulder at pursuing foes in the hope that I would whittle them down before they killed me.

This wasn't exactly exciting or engaging. It also wasn't like Nekro was throwing anything innovative at me, because every level was just stocked with huge mobs of bad guys. Levels in the later stages of this build turned into dreary battles of attrition where I had to gradually whittle my way through massive numbers of enemy forces. I would start by slaughtering respawning grunts like demon wolves and even barnyard pigs and chickens. This earned me the blood needed to summon up a good horde of monstrous buddies. Then I would hurl them at a mob of baddies. Most or all of my troops would then get slaughtered. If I survived, I would do this all over again. And maybe again and again, depending on the level.

Grind, grind, grind. Some levels forced me to go through this "second verse, same as the first" routine a half-dozen or more times before finally killing my way to victory. The level where I needed to hatch a giant troll as an ally and use him to plow through enemy mobs en route to demolishing power plants in towns is a good example of how much the developers drag out levels. Since my troll kept getting killed by the swarms of enemies, I had to run back and hatch at least eight or nine of them (and also grind through dozens of grunt monsters every time out, because said trolls always start off as babies in need of lots of blood to grow big and strong) before finally slogging through all of the bad guys and fulfilling the victory conditions.

Making matters even worse, getting killed means you have to restart the level. There are no save options or checkpoints in this build, so if you make a mistake, say hello to square one. Levels are not particularly big when it comes to size, but grinding drags them out so much that you can be stuck for a good hour or two on each of them. Combine this with the tough difficulty, and it's pretty much guaranteed that you will replay huge chunks of almost every level a minimum of three or four times apiece.

Story and level design are also quite weak at present. In the solo and multiplayer campaigns (multiplayer being available over LAN and the Net with direct IP connections), you're simply a creepy nekromancer out to take revenge on his former king by killing just about every one of his subjects in a generic fantasy realm. Plot points are conveyed solely through brief voice-overs during level loads. They include a lot of jokes that lighten the mood a bit from all the wanton murder going on in the gameplay, but they can be safely skipped without missing anything. And levels themselves have no goals other than to kill everyone on the map, take out those intimidating bosses, and destroy gadgets in enemy towns or enemy outposts.

At least everything looks suitably evil, with bloody giblets flying all over the place during battles and sinister background elements like gory torture implements and hanging corpses dotting the landscape. The camera gets a little lost at times, though. Views get obscured behind objects, and in close quarters, the isometric view tends to suddenly shift to more of a top-down perspective that limits how far you can see ahead. It can be very easy to wander into the midst of an enemy mob during these top-down sequences.

At times, Nekro is a good "interesting." But it's more often the polite "interesting" that you might use when you're not sure about something, or when you want to be negative without being too critical. There is a framework here that could be turned into a good game with some more development work between the current beta and the eventual final build. Right now, however, monotonous level design and the grind-happy difficulty need some serious attention if Nekro is to become more than just the intriguing experiment in game design that it currently is in early access form. 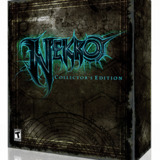