Burning rubber or burned out?

EA's long-running arcade racing series returns this week with the release of Need for Speed Payback. The title launches for PlayStation 4, Xbox One, and PC on November 10, and this time around, developer Ghost Games has amped up the series' Fast and Furious influence with a new storyline that focuses on heists and over-the-top action.

Despite some moments of fun, however, Payback is hampered by its seriousness and heavy emphasis on grinding. GameSpot awarded the title 5/10 in our Need for Speed Payback review. Critic Richard Wakeling said of the game's story, "The dialogue is hammy, but not in a fun B-movie way, and it frequently goes out of its way to reference everything from The Matrix to Dragon Ball Z, with some cringe-inducing millennial slang shoehorned in for good measure."

Other reviews for Need for Speed Payback have also begun appearing online, and as usual, we've roundup up a sample of them below to give you an idea of what critics think about EA's new racer. For a wider look at Need for Speed Payback's critical reception, be sure to visit GameSpot sister site Metacritic.

"Need for Speed Payback's banal racing is only magnified by this focus on grinding. The simple, almost retro, handling model provides occasional bouts of fun, but it's never enough to escape Payback's flaws, with an unwillingness to let you partake in its most hair-raising moments, and a general drabness that seeps into every layer of the game. Fast and Furious, this is not; and that's a disappointing outcome." -- Richard Wakeling [Full review]

"Need for Speed Payback is a big, competent, and confident arcade racer but it's really let down by its linear cop chases, its overwrought and insidious upgrade system, its dreadful dialogue, and its superficial action sequences. It feels fine and it looks flashy, but Payback really went all-in on its direct-to-DVD revenge tale and it was a bust for me." -- Luke Reilly [Full review]

"It's hard getting angry at Need for Speed Payback when instead a more fitting reaction seems to be one of complete apathy. I feel for developer Ghost Games, and after its promising debut with 2012's Rivals this clearly talented studio's spirit seems to have been crushed by the sheer weight of Need for Speed and the corporate burden it carries. In its hands the series has gone from accomplished to flawed to this, a joyless obligation of a game." -- Martin Robinson [Full review]

"Need for Speed returns with another flawed entry. There's the core of a great racing game here and when you're just driving around the open world, it's wonderful. The progression system encourages grinding and the basic story is delivered with B-movie seriousness, taking away from the racing pleasure. There's a better game inside of Payback, but you have to go through everything else to get to it." -- Mike Williams [Full review]

"Need for Speed Payback is a game with a brilliant story at its core. Silly, over the top and a little bit self-indulgent, but in a fantastic action movie way. It works and you'll enjoy every car chase, nitrous boost and quippy millennial line. It just misses the mark by adding RPG elements into an arcade racer and making the best cars always just out of reach." -- Same Loveridge [Full review]

"When you're racing, drifting, off-roading or being chased, Payback feels like a fine arcade racer in the classic Need for Speed mould. It doesn't have the glamour or the handling of Forza: Horizon, but it's scores big on variety, speed and thrills.

"Unfortunately, those simple pleasures keep getting spoilt by the amount of grinding and driving around that goes on in-between. Need for Speed was never the most-respected racing series, but it used to be one of the most fun. Payback has too much getting in the way." -- Stuart Andrews [Full review]

"One one hand, NFSP feels a lot like a film from a major movie studio with b-level actors, a bad script and talented cinematographers who were perhaps uninspired. On the other side, there is some fun, but simplistic quality to the gameplay. However, it is predominantly a game that is trying to do too many things at once. Unfortunately, it fails to stand out in any one area. Had it ditched the open-world concept for a more challenge and stage-based experience, the story would have been easier to follow and perhaps more engaging. Also, the game might have been able to focus more on its best attribute, which is pure, dumb racing." -- Brian Mazique [Full review] 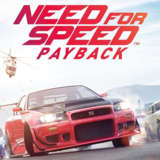