"The Criterion team is going to take Need for Speed into the next-generation."

After eight years away, EA is returning the Need for Speed franchise to Burnout developer Criterion Games. Current franchise leader Ghost Games is set to become EA Gothenburg once again.

Now the series returns to Criterion, the studio most well known for creating the Burnout series, and developers of 2010's Need for Speed: Hot Pursuit and 2012's Need for Speed: Most Wanted. The UK-based studio downsized in 2013, with many employees moving to Ghost Games. Since then, Criterion has taken on a supporting role, helping DICE on Star Wars: Battlefront, Battlefront II, and Battlefield V.

"With a strong history and passion for racing games and vision for what we can create, the Criterion team is going to take Need for Speed into the next-generation," EA said in a statement to Gamesindustry.biz.

All of this leaves Ghost Games to refocus, as the studio becomes an engineering hub supporting development across EA's other projects. "The engineering expertise in our Gothenburg team, some of whom are architects of the Frostbite engine, is vital to a number of our ongoing projects, and they would remain in that location," EA said.

The publisher is looking to transfer the creative team at Ghost Games to positions at Criterion and other studios within the organisation, but 30 roles still remain at risk. "Outside of the engineers and those that we plan to transfer to other positions, there would be 30 additional staff in Gothenburg, and we would hope to place as many of them as possible into other roles in the company."

One of the key reasons for the change comes down to location. "Despite our best efforts to establish an independent development group in Gothenburg over several years, it's become clear that the breadth of talent we need to maintain a full AAA studio is just not available to us there," EA explained. Criterion is based in Guildford, which is one of the biggest hubs for the UK's game development scene.

Much like the beginning of this generation, the Need for Speed series is moving house as the next-gen draws near. Criterion is a very different studio to the one that developed Most Wanted, with studio founders Alex Ward and Fiona Sperry departing in 2014. Nevertheless, it's still exciting to see the studio back making a game that's wholly its own, not to mention the first Need for Speed game for PlayStation 5 and Xbox Series X. 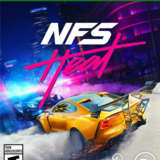