EA Sports is hitting the college gridiron once again, and we take an in-depth look at how this year's title is shaping up.

EA hasn't exactly had to deal with a lot of stiff competition in recent years when it comes to the realm of college football games (with last year's only competition coming in the way of 989's less-than-stellar NCAA GameBreaker 2004). In fact, for this year's installment in its long-running NCAA Football franchise, EA is running completely unopposed. This could easily have spelled trouble, since a lack of competition often leads to a product with only minor improvements. Thankfully, it appears that EA Sports has not rested on its laurels for NCAA Football 2005. Rather, the game seems to be shaping up to be another solid addition to an already great franchise. We recently spent some time with work-in-progress builds of all three console versions of NCAA Football 2005, and despite a few minor concerns here and there, we're generally pleased with what we played.

With EA progressively trying to shake the stigma that the NCAA series is just a loose spin-off of the Madden NFL titles, NCAA 2005 is aiming to really bring the atmosphere of collegiate football to the game. The biggest addition to this area of the game is a new home-field-advantage system that specifically benefits the home team and causes grief to visiting teams. The way this works is pretty simple: Depending on where you're playing, each home arena is essentially rated on how rough the home crowd can be on an opposing team. So, for example, if you're playing at home at, say, Duke, you're not likely to get a huge crowd response. But, if you're playing at home at, say, LSU, the crowd heat is going to be phenomenal.

What does this crowd heat do for you? Essentially, it acts as a massive distraction to your opponent. When playing on defense, especially, a meter will appear at the top of your HUD showing you where the current stadium pulse is at. By pressing a button repeatedly (or, in the GameCube's case, two buttons), you can try to get a heavier rise from the crowd. The higher the pulse, the more effect you'll see. As a result, the screen will shake, the noise level will be deafening, and, eventually, your opponents will become more mistake-prone. False starts, incorrect lineups, and misheard audibles are just some of the effects you'll encounter. The effects of the stadium pulse will be especially rough on freshmen (and generally newer players), whereas seniors will be able to handle the effects better. You'll run into the stadium pulse meter on offense too but usually only when you need to calm the crowd down. Sometimes they can get a bit rowdy after a big play.

Another key area of interest in NCAA 2005 is the new player morale system. Each of the key players on your team has a pair of meters you can access by holding the right control stick down, right, or left. Holding it down brings you to an in-game menu that shows you the matchup between your backfield and the linebackers; holding it left gives you a look at the receivers versus defensive backs; and holding it right shows the matchup between offensive and defensive linemen. On any given player, you'll see a status for both composure and skill. Composure is measured by a circular meter that, when full, means the player is fully composed and calm. However, when it drops, that means the player is rattled. The skill meter occupies the space right next to the composure meter. When a player is looking good, in terms of skill, the meter will be colored green, and depending on the degree of skill the player possesses, it will fill up to a corresponding level. If the meter is red, that means a player isn't going to play especially well. Skill seems to be affected slowly throughout the course of a game, whereas morale can shift dramatically depending on how a series of plays goes down.

When you do manage to make big plays in NCAA 2005, you'll have the opportunity to determine how you want to celebrate. If you're mild-mannered, you can simply pass the ball off to the ref and go about your way. If you're feeling a bit saucier, you can celebrate in one of three ways once a play is over. By holding down one of two taunt buttons and then pressing one of three main controller buttons, you can have your player, the crowd, or your mascot celebrate. The first celebration button performs a mild taunt, while the second performs a more involved celebratory animation. Too much celebrating is no good, though, because if you do it, the ref will penalize you for unsportsmanlike conduct. Though player and mascot taunts consist of pretty run-of-the-mill stuff, crowd taunts can be a little more interesting. Aside from typical celebrations, the crowd will also usually hold up one of the default signs set for each school (some of which are actually rather funny, such as the trio of Duke fans who hold up the "When does basketball season start?" sign), or it may hold up a customized sign you will be able to design in the game's create-a-sign mode.

Madden NFL 2005's primary gameplay focus this year is defense, and in terms of changes and upgrades, the apple hasn't fallen too far from the tree. This year's college game will give you the opportunity to delivery much bigger hits on defense by using a specific hit button that, when held down, delivers an absolutely punishing blow to a ball carrier. Like the defensive pursuit button, timing is very much of the essence with the hit button, because if you don't time the hit correctly, you'll miss the runner and be left in the dust. The timing of the hits definitely takes some getting used to, but once you master it, these major hits will be extremely useful to your defensive game. Offensively, some additions have been made to the audible system. You will now be able to call slant route audibles, as well as flip running plays without having to flip your receivers around as well.

In terms of game modes, most of the same play modes from last year's game will be held over in 2005. The dynasty mode has gotten the largest number of upgrades of any one particular mode, and it includes the addition of program integrity and prestige. It's up to you, as the coach of your school's team, to maintain discipline and order within your team. If a player is getting out of line academically or on the practice field, then you'll need to send a message via a suspension. You will have the option to let infractions slide, should a major player be needed for the next game, but if you do this too often, you'll find yourself in hot water with the NCAA, who can penalize you by killing scholarships. Conversely, if you discipline too much, star players may up and transfer to other schools. Basically, it's a system of checks and balances. Another addition to the dynasty mode is the category of "athlete" player. These are players that you can recruit who, while not necessarily a perfect fit for any one position, are physically talented enough to be developed into whatever position you may need to fill.

The graphics category is where our concerns about NCAA Football 2005 begin to mount. On the whole, the game at this stage of development does look pretty good. The player models are a touch more detailed in most every category than last year's game, and the basic on-the-field action is looking pretty great. Basic tackling, passing, catching, and running animations all look nicely motion-captured, but some other animations, such as the defensive-movement animations, don't look quite as natural. Some animations, such as the movements of the defensive players as they are coming out of their huddles, even look a bit rushed. Hopefully these issues will be smoothed out before the game ships next month.

Nearly every one of the game's football arenas has gotten a nice layer of polish since last year's game, with more detail on the field and in surrounding environments. Up-close looks at the fans, coaches, and refs show some slightly improved-looking models. The basic crowd graphics are, unfortunately, a little low in resolution for our taste and look somewhat out of place when compared to the more-polished and realistic fans featured in cutscenes. Again, hopefully the visuals are an area that EA will continue to tweak between now and the game's release.

NCAA Football's audio is shaping up quite well. Aside from the excellent array of brutal hits and the grunts and shouts from the players, you'll experience plenty of authentic football-arena ambiences, with exceptional-sounding crowd noise that can, at times, even be a little overwhelming. Commentary this year is provided by the trio of Brad Nessler, Lee Corso, and Kirk Herbstreit. All three provide well-delivered, if not always the most insightful, dialogue. Overall, the commentary seemed appropriately accurate while we played.

On top of all of this, both the PlayStation 2 and Xbox versions of NCAA Football 2005 will be online, letting you compete head-to-head with other online players. Furthermore, on the Xbox, players can take advantage of the usual array of Xbox Live features. All told, though there are some rough spots in what we played of NCAA Football 2005, we're still convinced the game should turn out just fine, provided a few tweaks can be made here and there to the game's presentational aspects. The new additions made to further emulate the college environment are pretty cool, and we definitely like the new morale and skills systems. We'll bring you more on NCAA Football 2005 as its July release date draws nearer. 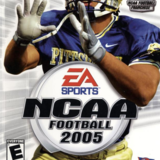