Get a load of the old and the surprising new faces that'll hit the court in EA's upcoming third street b-ball game.

As the release of NBA Street V3 approaches, we'll be looking at different aspects of the revamped third entry in EA's fresh twist on basketball. Our first topic will be the game's roster of characters. NBA Street V3 will have an eclectic roster of players that mixes real-life legends along with original characters, some of which have appeared in previous installments of the series. In addition, the game will feature a cool new variation on the formula that will be exclusive to GameCube owners.

In fact, rumors about the 'Cube version of NBA Street V3's roster started late last month as box art for the game appeared to imply that Mario and company would be making an appearance in the game. We'll put the rumors to bed now: Mario, Luigi, and Princess Peach are all on board and ready to mix it up with V3's street crew. The three unlikely ballers will even get to mix it up on their own Nintendo-themed court, visible in the newly released trailer for the game.

While the Nintendo roster is understandably exclusive to the GameCube edition, there will be some additions to the lineup that are common to all the platforms, not to mention plenty of familiar faces who are back for more action. While PS2 and Xbox owners may not have their own exclusive characters to play around with, EA will kick them the small consolation prize of online play (not a bad deal, really). For now, let's take a look at some of the new and old characters that you'll get to play as in NBA Street V3.

The youngster. The prodigy. The grown man handles in the little-man hands. Biggie Littles first appeared in NBA Street Vol. 2 where he could be found balling in the Windy City. In NBA Street V3, Biggie Littles has made one of New York City's most famous streetball landmarks, The Cage on West 4th Street, his new stomping grounds. Competitors have come to respect Biggie Littles's mastery of the rock-on offense and defense. The little man is as well known for breaking a defender down off the dribble as he is for swiping the rock out of your hands before you drop your first dribble. Still just a kid in a grown-up game, BL won't be throwing down many dunks. Those who can, take advantage of Biggie Littles's lack of size and strength. Easier said than done.

The first lady of NBA Street. Dime originally appeared in NBA Street Vol. 2 balling out at Lincoln College in Los Angeles. In the meantime and in between time, Dime has relocated to Baltimore, where she can be found running things at The Dome. The young lady has earned her stripes at one of B-More's most popular courts, displaying an all-around game highlighted by her crazy dribble moves and fast hands on defense. Dime can do it all, but with her small frame, a lack of power is the one weakness in her game.

Back in action after a long hiatus, Takashi, the shot-blocking machine, returns in NBA Street V3. Takashi first appeared on the rooftops of Los Angeles in the original NBA Street, but he has moved on to make his mark at the legendary Venice Beach basketball courts. At 7 feet, 8 inches tall, Takashi-san is an imposing defensive presence who loves keeping the defensive lane free of traffic almost as much as he likes to lower the boom at the end of a huge alley-oop. Man to man, he doesn't have the greatest handles, but he still poses a daunting challenge in a game of three-on-three.

Been there, done that. Carlito Vargas, aka Bonafide, is one of the most respected ballers around. In the original NBA Street and NBA Street Vol. 2, you could find him holding court at Broad Street in Philadelphia. In NBA Street V3, Bonafide has taken his game to Dyckman Park in New York City, one of the most competitive streetball courts in the world. Bonafide is known for wowing crowds with his highlight reel dunk and mesmerizing defenders with his insane handles. Bonafide is the epitome of streetball. Flashy, talented, and always hungry for another win.

Deserving of his place on the list of greatest players never to play in the pros, Stretch is still representing for the old school in NBA Street V3. Over the years, Stretch has become a virtual landmark at Rucker Park, where you will still find him educating the next generation on the art and science of streetball. He's not necessarily fleet-footed, but Stretch can still keep up with the youngsters and the rest if his game is airtight. He's got the handles, the hops, the heart, and he's been holding it down for years. Stretch is Street.

The new baller on the scene, Phat, comes to us representing the South and can be found balling out at MacGregor Park Pavilion in Houston, Texas. Not much is known about the man from the Lone Star state except he's got big game to go with his big frame. Phat isn't the quickest baller up and down the court, but he can be a serious force in the paint and is known for leaving his opponents lying flat. Both on and off the court, Phat is the friendly giant. He's got that Southern hospitality and loves to be chillin' and jokin' with his posse. But if you bust him once, he'll bust you back twice as hard. Phat is not afraid to throw his weight around. 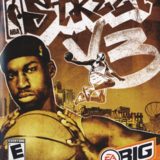