Frenchman Tony Parker of the Spurs lands global cover slot, with Gasol, Deng, and Bargnani taking the honors in their respective homelands.

NBA commissioner David Stern has been vocal about turning the North American pro hoops league into a global institution, starting with a team playing out of Europe within the next 10 years. That international approach appears to have dribbled down to the league's gaming adaptations, as Electronic Arts today announced a starting lineup of four cover stars for NBA Live 09, none of them Americans.

San Antonio Spurs point guard Tony Parker will take the main honors, fronting the game around the world, including in his native France. However, gamers in some regions will instead see their fellow countrymen on the boxes. Los Angeles Lakers power forward (and NBA Finals runner-up) Pau Gasol, Chicago Bulls small forward Luol Deng, and Toronto Raptors power forward Andrea Bargnani will grace covers in Spain, the UK, and Italy, respectively.

The international emphasis in NBA Live 09 goes deeper than the cover. Electronic Arts is tripling the number of teams from international hoops federation FIBA in the game, allowing gamers to play for the pride of one of 24 countries. The game also features a FIBA World Championship mode using the leagues rules and tournament organization.

For more on NBA Live 09, check out GameSpot's hands-on preview. 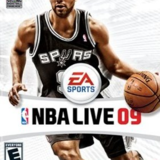