EA Sports' latest hoops title comes out of the gate on the Xbox, PS2, and GameCube.

Electronic Arts announced that gamers can now scoop up the PlayStation 2, Xbox, and GameCube versions of NBA Live 2004, its latest basketball title. The MSRP is $49.99, about the same as a real-life NBA ticket--in the furthest-back row, before the service charge or "convenience fee."

NBA Live 2004 is being promoted as having the following new or improved features: 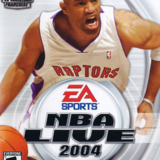