Shhhh. Hey, EA Sports, can you hear the footsteps? They're getting closer and closer, louder and louder. Those feet belong to NBA Full Court Press, the new basketball release from Microsoft, and they just might be the first ones big enough to fill the huge shoes of NBA Live ‘96.

After years of Scottie Pippen Slam City's and NBA Jams, we are finally nearing release of the first NBA-licensed, five-on-five basketball game that looks ready to take on EA's vaunted Live ‘96. Packed to the gills with options, realism, and NBA style, NBA Full Court Press is looking to make us forget all about its famous competition. Featuring crisp, athletic-looking, high-resolution players, competing on perfectly replicated NBA courts, this title allows the player to play in single game, tournament, or season modes. If the action gets boring at home, you can jump on-line (via modem or LAN) and find some international competition. You can also create your own team through trades and a player editor, or simply field one of the custom or all-star teams.

An early beta of this game looks like it might be ready to live up to our lofty expectations. The graphics, in resolutions adjustable up to 1280x1210, certainly back up Microsoft's claim that NBA Full Court Press will be "more detailed than any other basketball game on the market." Excellent animations, such as dunks and blocked shots, help to spice up the gameplay, as well as terrific sound effects, like the ball swishing through the net and the rim getting rattled on a particularly powerful jam. All of the pros are represented, and Microsoft hopes to have all of the offseason logo, uniform, and roster changes accounted for by the release date (no easy task, given the transient nature of the Nomadic Basketball Association).

As far as options and graphics, NBA Full Court Press looks like a definite championship contender. It's the smooth, but as yet unfinished, gameplay - Microsoft promises more dunks by the finished product - that will ultimately decide NBA Full Court Press' place in the high-stakes world of video hoops. 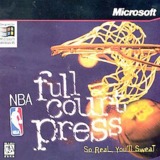