Unlike football and baseball, the basketball court is an arena in which EA Sports and 2K Sports are free to go head-to-head with officially licensed simulations. That level of competition will continue in the future, as the National Basketball Association announced today that it has extended its partnership with both publishers to continue producing games based on the league's teams and stars.

The NBA did not indicate when the new partnership deals are set to expire, saying only that they were multi-year arrangements. 2K Sports had not responded to a request for clarification as of press time, while EA Sports declined to comment. The deal allows both publishers to create traditional 5-on-5 hard-court simulations, as well as arcade-style games, for consoles, online services, and mobile devices.

2K Sports made the most of its license last year, after EA Sports canceled the Elite reboot of its NBA Live franchise. According to today's announcement, NBA 2K11 has now sold more than 5 million units, making it the fastest-selling title for both the franchise and Take-Two's sports publishing label.

NBA 2K12 may have another big year in 2011, as EA Sports doesn't plan to return to its simulation franchise until 2012. However, the publishing label does plan on releasing a new installment in its arcade-style NBA Jam series this year. Titled NBA Jam: On Fire Edition, the game is expected to be available through Xbox Live and the PlayStation Network this October. 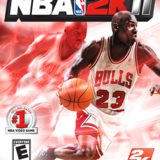