We got a first look at NBA 2K10 and checked out the promising new My Player mode.

The NBA 2K series has added plenty of new game features and modes over the last few years, including live rosters, blacktop street basketball, and an updated Association mode where you get to manage an NBA franchise. One of the biggest new features in NBA 2K10 is the My Player mode, and we got a chance to make a name for ourselves when we recently took a look at it.

Instead of controlling a whole team, My Player is similar to FIFA's Be a Pro and Madden's Superstar modes in that it focuses on an individual player. My Player lets you take an up-and-coming player and set him on the path to a professional basketball career. However, before you can take to the dazzling lights of an NBA stadium, you need to prove to an NBA franchise that you're worthy of being a benchwarmer, let alone a starting player. The mode starts out on the summer circuit, and your first major goal is to get an invite to an NBA training camp.

When you begin the My Player mode, you get to build a new character from scratch with the ability to change a slew of attributes, including your player's position, play style, jersey number, name, age, and college. You can also drill down into submenus to customise his body type, hair, and facial features; add tattoos and accessories; and change his animation styles. Finally, you can spend skill points that you've earned during games to customise skills, such as dunks, free throws, and 3-pointers. It costs less to spend points on the core attributes for your play style, so if you're a power forward, for example, it'd be wise to spend points on your inside shot skill rather than 3-pointers. It's also worth nothing that if you downloaded the NBA 2K10 Draft Combine game for the Xbox 360 or PlayStation 3, you can import your created player directly into the My Player mode and continue your player's career.

Naturally, your stats won't be very good starting out. You won't sprint very fast--even when using turbo--and your aiming won't be as precise as a pro, so you need to choose your shots carefully if you hope to earn a good average. Before you can get an invitation to an NBA training camp, you need to play some summer matches and convince a coach that you make the grade. Reaching in-game goals, such as scoring at least 51 percent of your shots, limiting your matched player to a maximum of two baskets, or finishing the game with a strong teammate grade will mean you progress more quickly. You can improve your grade by staying on your man, scoring, and executing good passes. Conversely, you will be negatively affected if you leave your assigned player, allow him to score, commit fouls, or call for the ball excessively, for instance. You can also practice drills and improve your skills when not playing games, and if your player isn't good enough to join an NBA team roster at the end of the summer, you can continue on in the NBA D-League to try again later. The My Player mode looks like it will make a great addition to the other main game modes, which include seasons, a rookie challenge, situations, playoffs, and street basketball.

While the controls feel responsive, free throws are still a bit difficult to perform. Nailing the precise timing takes plenty of practice, but if your free throws really stink, you can take to the practice mode to work on them. You can also work on your game through practice matches and rehearse plays, such as pick-and-rolls and give-and-gos. We've had issues with NBA 2K's blatant product placement before, and it looks like things haven't changed. These include T-mobile's starting lineups, Sprite's "ice cold keys to the game" pregame analysis, and Gatorade's "moment of the match" replays.

NBA 2K looks great again this year--including the players, crowds, and stadiums--and shows a great level of attention to detail from the development team. Basketball fans won't have to wait long to get their hands on NBA 2K10, with the game due to be released on October 6 in the US and October 9 in Europe. 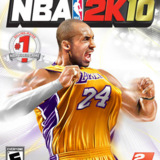