We score our first look at the PS3 version of Sony's upcoming basketball game.

As Sony's NBA series stands right now, each console version of the game seems to have its own identity. On the PlayStation Portable, the series is known for its imaginative and mostly fun minigames; the PlayStation 2 edition is fueled by the drama-infused, story-driven "The Life" saga. The exception is the PlayStation 3 version of the series, which debuted last year with the launch of the PS3. Lacking the minigames and the story of the other two versions of the game, last year's NBA 07 sought to tempt basketball gamers with some new uses for the Sixaxis controller and improved visuals over the last generation of consoles. With NBA 08 heading to us this September, and the PS2 and PSP versions well defined, the trick for the PS3 version of the game is in forging an identity all its own. We had a chance to try the game at a recent Sony press day to see how that identity is shaping up.

The first part of NBA 08's profile might be its presentation, including a new look on the front end, with a main menu design that's quite a departure from the previous entries in the series. The game will also include play-by-play and color commentary from Mark Jackson and the voice of the Seattle SuperSonics, Kevin Calabro. The second part is the idea of player goals. If you've played the PS2 version of "The Life," you know that during each game, you're given a set of goals you need to accomplish in order to move past that particular game situation. That system has been borrowed and tweaked a bit in the PS3 version; here, goals will apply to everything you do in NBA 08 and across all modes in the game.

During any match in the game, from a quick-play game to a midseason match, you'll have goals that you can meet. Some will be simple--say, grabbing a certain number of rebounds, or making a two-point shot with your center--while others will be considerably more difficult, such as matching Kobe Bryant's 81-point performance from last season, or Wilt Chamberlain's single-game record of 100 points. As you complete these goals, you'll be notified by a pop-up on screen, and you'll earn credits which you can then use to buy unlockables such as jerseys, floor patterns, accessories, shoes, and even attributes for your created player. The game will include a "progression hub" where you can check all of your progress in the game: which goals you've completed, and which ones remain for you to finish. In addition, the game will include milestones (such as earning a certain number of total credits) that will give you further bonuses.

While we didn't get a look at the create-a-player interface in NBA 08 (it wasn't in the build we played), it does seem the game is putting a strong emphasis on using created players. Completing a goal with a created player, for example, will earn you a credits bonus that you wouldn't receive by using Steve Nash or Allen Iverson. Still, as producers told us, you won't be required to use a created character, a nod to the basketball purists who insist that their rosters stay as realistic as possible.

The pervasive goal system aside, a few new gameplay wrinkles have been tossed into NBA 08 that make it feel different than any other basketball sim on the market. Last year's game saw the introduction of Sixaxis controls to the gameplay--tying the juke moves on the thumbstick to the tilt controls on the PS3 controller. Though reaction was mixed to that decision, Sony is continuing full steam ahead with the Sixaxis integration; in the build we played, you could pull the ball up off the dribble and move it around with your player simply by twisting and turning the Sixaxis around. Tilt it upward and to the right, for example, and the player would hold the ball high and to his right, the player's movements synchronized to the movement of the Sixaxis. This, in conjunction with a new tweaked passing system (tap the pass button for a bounce pass, hold it down for a lob) will help you make smarter decisions when looking to keep the ball away from defenders and spread it around to your teammates.

The Sixaxis tweaks continue on defense as well. When defending a man with the ball, you can choose to either keep your hands high or low and wide by tilting the Sixaxis either up or down, respectively. Which tactic you choose will determine how effectively you defend against your opponent. If you've got your hands up high, your opponent shot attribute will suffer if he tries to take a J in front of you; however, you'll be more susceptible to a juke or spin move. Conversely, if you've got your hands low and wide, your opponent may not be able to get around you, but he might certainly find some success with his shot. It's a bit of cat and mouse that looks to add some more depth to the defensive game in NBA 08.

The game of the week feature, introduced in NBA 07, will be receiving some upgrades as well, most notably in the form of "zone goals." Say Dwyane Wade becomes unconscious from beyond the arc on the right-hand side of the basket. When you look to take on that game of the week challenge, a zone will light up on the floor indicating where you should position D-Wade in order to try to match his star performance.

Graphically, NBA 08 is still running in 1080p, and the producers are promising more animations than ever before in the game. The arenas are benefiting from a bit more detail in the crowds, as well as a subtle haze effect that lends the environments more depth than in the previous game. In our time with the game the frame rate seemed to be relatively stable, which is promising news for a game that has several more months of development time ahead of it.

It's a shame that NBA 08 won't have lynchpin features such as franchise mode or a next-gen version of "The Life." Still, the game seems to be making steps toward establishing its own identity in the crowded basketball market. We'll be bringing you more on this game in the coming months. 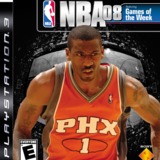