Electronic Arts and NASCAR now have an exclusive relationship when it comes to interactive games and the NASCAR brand. The deal, which secures the relationship until 2009, gives EA exclusive rights to use more than 65 drivers, including Tony Stewart, Dale Earnhardt Jr., and Jeff Gordon, 23 official tracks, and 175 cars from the NASCAR Winston Cup and Bush series, in its games.

EA's NASCAR Thunder 2004 was developed by EA Tiburon and shipped last week for the PS2, Xbox, and PC to respectable reviews (GameSpot gave the different versions scores of 8.8, 8.8, and 7.5, respectively). Future NASCAR titles from EA will be published under the EA Sports brand.

"While it is rare for NASCAR to enter into an exclusive licensing arrangement, Electronic Arts has truly stood out in the long-standing efforts to support the entire NASCAR industry," said Blake Davidson, managing director of licensed products for NASCAR. "Additionally, EA is a sophisticated marketer, and their creative advertising and promotional efforts will help NASCAR continue to attract young fans, which is an important part of our overall growth strategy."

In the past, NASCAR has been less selective in its licensing agreements. At one point in 2002, publishers EA, Sierra, and Atari were publishing products bearing the NASCAR brand.

Papyrus Racing Games, which has developed 10 NASCAR-branded PC racing titles since its first was released in 1996 and who 10 days ago released a patch for its February-released NASCAR Racing 2003 Season, was aware of EA and NASCAR's exclusive relationship deal even as Papyrus was building the 2003 title, briefly tinkering with the idea of calling the game "Final Season."

"It's unfortunate that the relationship with NASCAR had to end. We did some high-quality work, but now it's time to move on," Rich Yasi, director of design and production at Papyrus, told GameSpot today.

Papyrus' titles consistently scored better in GameSpot reviews than EA's competing NASCAR Thunder releases, but EA's ability to release across several platforms (rather than Papyrus' focus on PC games) may have contributed to NASCAR's decision to go with EA. Papyrus' Yasi acknowledges that consoles are a market that they have neglected and will be working on capturing in the future. 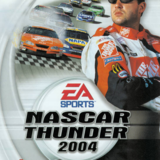