The 2003 season may be the last game in Papyrus' acclaimed NASCAR Racing series. From what we've played, it may turn out to be the best yet.

For ardent fans of racing games, few things are more exciting than the release of a new game by Papyrus. This developer has built an enviable reputation by creating some of the most intense and realistic racing simulations on the PC over the years. The legendary Grand Prix Legends, released back in 1988, is often considered one of the greatest PC sims ever and still boasts a very devoted following. Of course, Papyrus is also known for its long-running NASCAR Racing series, which has usually left competing NASCAR games in the dust where realism and attention to detail are concerned. You'll soon get to race to the stores to pick up the newest edition in the series, NASCAR Racing 2003 Season. It will likely prove a bittersweet purchase, though: This may well turn out to be the very best game in the series, and it also may be the last.

Rich Yasi, design and production director for NASCAR Racing 2003 Season, has said in various interviews that Papyrus wants to focus more on console gaming, where so much of the gaming industry is headed. He's noted that the days of truly hard-core racing sims are likely numbered because of the emphasis in the console world on relatively simpler driving games with broader appeal. According to Yasi, if Papyrus is to continue thriving, it will need to adjust its approach to making racing games accordingly. But take note: Even if there aren't plans for another NASCAR racing game, that doesn't mean Papyrus is abandoning the PC.

Fans of hard-core racing sims shouldn't be too disheartened, considering the sophistication they should find in 2003 Season. Some skeptics generally mock NASCAR as just "driving left fast" and as simply racing in circles for hours on end. As in the past, this latest version of NASCAR Racing should quickly make believers out of the skeptics. On the surface, NASCAR might look simplistic, but in practice it's both exciting and subtle, and Papyrus has long been an expert at re-creating both the thrills and the nuances of racing. In NASCAR Racing 2002 Season, the physics modeling was superb, but Papyrus claims that it will be even better this time around, thanks to partnerships with Goodyear and Jasper Motorsports (Winston Cup Team #77).

While it might initially look like the cars in the game are just zipping around simple ovals, once you start playing you'll quickly notice that these ovals aren't really so simple in practice. Too much acceleration over the transitions between turns and straights can easily send you spinning out of control. The same is true of moving between the apron and the banking. Detailed surface mapping of each track, along with very convincing visual rendering of the car's jouncing suspension, should let you both see and feel how every little bump and dip in the road affects your car.

To make the most of each track's unique characteristics, you'll get to tweak your car setup like the pros. You'll be able to adjust camber and caster, rebound and ride height, the amount of grille tape, the transmission ratios, and much more. To help you adjust your setups, you'll be able to check the pressure and outer, middle, and inner temperatures for each tire after running test laps.

With all the realism options maxed out, some players might find the game a bit overwhelming at first since a slight mistake can easily send you hurtling into a wall. Fortunately, Papyrus will again be including the sorts of optional driving aids that are expected of nearly any racing sim these days. You'll be able to toggle antilock brakes, automatic shifting, and traction control, among others. Also, a new slider will let you choose just how much steering assistance you want. If you play using the keyboard instead of with a wheel and pedal set, you should hopefully find the experience more realistic than in the past. In 2003 Season, you'll be able to adjust the momentum for the steering, gas, and brake keys to create a more natural feel.

A new adaptive AI feature should help you keep up with the pack as the field dynamically adjusts its driving to your abilities. If you want, the game will also determine the base AI skill rating for each new race in a championship season based on how you performed in your last race. Papyrus says the AI driving will be improved overall and should be the best in any of its games to date.

When you head online, you'll find further welcome additions. A new voting system will allow the group to kick out problem players, change to a new track, and so forth. A league admin will now be able to moderate a race by throwing flags, adding or subtracting laps, and the like.

NASCAR Racing 2002 Season looked stunning, and the same should be true of the 2003 edition. In the beta we played, the cars looked gorgeous, and since this will be a fully licensed game, you'll see all the real-world sponsor logos accurately plastered across the vehicles. Car interiors will sport the same level of detail, with the roll cage tubing, window net, dash gauges, and functioning rear-view mirror all finely textured.

Like the cars, the tracks will be meticulously modeled after their real-world counterparts, with lots of nice little touches like infield grass mowed in neat stripes. The track surfaces look particularly impressive at this stage, with minutely detailed textures that show subtle striations, large cracks, and accumulated rubber on the main racing line.

Papyrus promises plenty of new features to enhance the already fine visuals. This time around, you'll be able to spot distinct differences between four different car models. Blimps, planes, and helicopters will soar overhead while you race. Animated flags will let you see which way the wind is blowing and observe if it changes during a race, thanks to the game's new dynamic weather system. Reflections off buildings, extremely realistic-looking glare from the sun, accumulated oil and dirt on the windshield, a populated pit road, and other new visual features should help add to the immersion.

While all these improvements sound great in theory, it remains to be seen exactly how well they'll work in practice. NASCAR Racing 2002 Season was a system hog that could suffer frame rate problems when you raced in a full field of cars with the detail settings only partially turned up. Hopefully things will run more smoothly this time around. We had mixed experiences with our hands-on beta, so only time will tell for sure.

As developers race to outdo one another in the field of graphics, audio sometimes gets overlooked. Fortunately, Papyrus knows how vital audio is for a game's effectiveness, so expect great things in that department from 2003 Season. Stock cars produce an unforgettable throaty roar that immediately sets them apart from, say, F1 cars with their shrill whine. It seems as though Papyrus has nailed the characteristic NASCAR engine sound here. As soon as you first sit in your car in the pits during a testing session and listen to the idling engine, you'll know you're in for a treat. It should really sound like you have a monster on your hands.

As you accelerate up to full speed and begin to blast around the track at over 170mph, the sound should be brutally powerful and convincing. When you're racing in a full field with your speakers cranked up, the deafening roar of all the engines should be overwhelming in the best way.

Papyrus is paying attention to the smaller audio details, too, so expect to hear realistic screeching when you stand on the brakes and fingernails-on-a-chalkboard scraping when your car grinds along a wall. Once again you'll also hear your spotter give you authentic warnings and instructions over the radio.

From what we've seen so far of NASCAR Racing 2003 Season, it could well become the jewel in Papyrus' development crown. It's depressing to think of this great series coming to an end, but it should most likely go out in style. 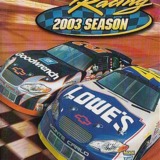