Online reports claim Eutechnyx will develop game based on wildly popular racing circuit for megapublisher, to launch on Wii, PS3, and 360 next February.

What we heard: Last September, EA Sports president Peter Moore confirmed to GameSpot that Electronic Arts was letting its long-held NASCAR license lapse. Today, game-industry site Gamasutra cites "sources close to the situation" that EA's archrival, Activision, will publish the next installment in the series.

The report was also backed up by a less reliable outlet--a post on the EA Sports forums. Poster N0Fear88, a two-year veteran of the site, claims another "inside source" at NASCAR said the title was in development for the PlayStation 3, Xbox 360, and Wii and would be released two weeks before next February's Daytona 500.

In late August, British developer Eutechnyx, the studio behind the racing games Ferrari Challenge and Big Mutha Truckers, accidentally tipped its hand by posting the forums for NASCAR 2011. (The google cache showing the page can be found here; the logo is below..) It is unclear at which of Eutechnyx's four studios the game will be developed. The Gateshead, UK-based shop also has operations in Pittsburgh, Pennsylvania, as well as Chengdu and Hong Kong in China. 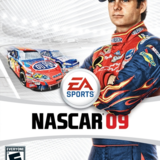