NASCAR fans hoping for the full-fledged return for the series to console videogames will have to look in directions other than at EA Sports. Speaking with GameSpot News today, EA Sports president Peter Moore confirmed that the sports game developer has "no plans" for a new NASCAR racing game. From... 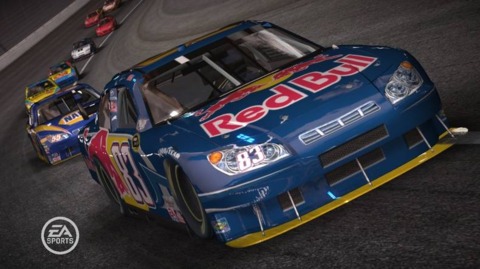 NASCAR fans hoping for the full-fledged return for the series to console videogames will have to look in directions other than at EA Sports. Speaking with GameSpot News today, EA Sports president Peter Moore confirmed that the sports game developer has "no plans" for a new NASCAR racing game. From the news story:

"There are no plans right now for NASCAR from EA," Moore said. "We had a great relationship over the years that I thoroughly enjoyed when I first got here. Unfortunately…we had to make some tough trade-offs. We've had to redeploy some of those folks. A number of the NASCAR team has moved over now to EA Sports MMA, which will be shipping next year. [We're] still a huge fan of NASCAR, but no plans right now to develop any further games for NASCAR from EA Sports."

EA Sports' history with the NASCAR series goes back to 1997 with NASCAR 98 for the PlayStation and Sega Saturn and has continued through eleven iterations since. Despite the oval-racing thread that runs through the heart of stock car racing, the NASCAR series has seen its share of variety--from ambitious (if misguided) PC simulations like NASCAR SimRacing to family-friendly games like this year's NASCAR Kart Racing and many points in between.

A look at how the last few NASCAR games from EA Sports have sold:

As you can see, while NASCAR 09 sales numbers were respectable, they were less than half of what the series was selling at its height on the previous generation of consoles and down a good chunk from the year prior.

Of course, with EA Sports ending its NASCAR game series, the question now becomes what's next? It seems like both parties are moving on without looking back. On consoles, the NASCAR license will next be seen in Gran Turismo 5--as Sony's upcoming racing game will feature official NASCAR cars and tracks. And there seems to be PC resurgence for NASCAR as well--earlier this year PC sim developer iRacing announced a partnership with NASCAR to develop an online racing series based around the NASCAR circuit. Already iRacing features a number of NASCAR tracks including well known locales like Daytona International Speedway, Bristol Motor Speedway, and Infineon Raceway (among others) with more tracks on the way.

As for EA Sports, it seems that organized motorsports videogames have been a tough fit for the company of late, something Peter Moore admitted to me back in March:

"So organized motorsports is a challenge. You know, we've been a huge licensee of NASCAR for many years. It's been challenging the last few years. I think a lot of it is the fact that we put out a game maybe every year, and there's not a lot of changes in NASCAR. I guess, [Dale Earnhardt Jr.] going from number 8 to number 88 and changing teams, is about the biggest thing that happened recently. But we've got to step back and figure out how we bring, whether it's NASCAR or any of the organized motorsports to life in a different way in the world of video games."

Even as EA Sports moves its resources away from NASCAR and towards projects like EA Sports MMA, racing games aren't completely dead to the publisher--consider the upcoming Need for Speed: Shift, which represents a more realistic focus for the NFS series, with real-world locales and a more demanding driving model. It might not be the game that the NASCAR faithful were hoping for from EA, but it's something.

As an aside, the idea of someone bringing something new to oval racing is both exciting and all-too-rare in today's sports gaming environment of exclusive licenses. Here's hoping whomever it is makes the most of the opportunity.