Even if the PlayStation 2 is now in its ninth year on the market, Sony's workhorse console is still getting support from third-party developers. Not a week after Sony announced that the PS2 had sold its 50 millionth unit in North America, Namco Bandai has announced that Ultimate Ninja 4: Naruto Shippuden will arrive in the region on Sony's aging console this March.

The first installment in Naruto's spin-off Shippuden series to be released in North America, Ultimate Ninja 4 picks back up with the titular spiky-haired anime star two and a half years after his departure from Hidden Leaf Village. The game will follow the events portrayed in Viz Media's Naruto Shippuden anime series, with Naruto returning to the village to confront a new host of villains and ne'er-do-wells.

Like previous installments in the Ultimate Ninja series, Naruto Shippuden features a number of different modes, accommodating fans of both mano-a-mano fighting and role-playing. The Master mode is where players can experience the Shippuden story arc, an original line that Namco Bandai notes isn't available through other media. The Story mode drops players into the role of Naruto and relies heavily on role-playing and action-platforming gameplay mechanics.

In the Master mode, players will also be able to unlock playable characters for use in the Free Battle mode. The fighting section of the game includes 52 characters from the Naruto universe, including many pulled from the Naruto Shippuden anime storyline.

Ultimate Ninja 4: Naruto Shippuden is in development at CyberConnect2, which most recently created Naruto: Ultimate Ninja Storm for the PlayStation 3. 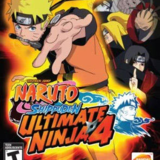