We hone our ninja skills with a localized build of Naruto: Ultimate Ninja 2 for the PlayStation 2.

In the world of anime, Naruto is rivaled perhaps only by Dragon Ball Z in terms of generating fanaticism. Much like the latter franchise, Naruto has already spawned more than a dozen announced games on eight different platforms. Most of the Naruto games to come out thus far have been released in Japan only, but with the ever-growing popularity of the anime and manga in the United States, you can bet that more and more Naruto games will make the trip across the Pacific. However, with games announced for the Wii and Xbox 360, it's only a matter of time before Naruto parts ways with the old console generation in favor of the new. But there's still more in store for the PlayStation 2 with an upcoming sequel to last year's stylish brawler, Naruto: Ultimate Ninja. Appropriately titled Naruto: Ultimate Ninja 2, the sequel has been available in Japan since 2004 but is finally coming stateside next month. We sat down with a localized build of the game to see how Ultimate Ninja 2 improves on its predecessor.

There are three basic modes in Ultimate Ninja 2: a versus mode where you just play a basic fight, a training mode where you can practice moves with the character of your choice, and the ultimate road mode. In addition to these modes you can visit Naruto's home to look at all of the items you've collected, or you can go to the Tanzaku Market to purchase new items such as music, videos, and figures using ryo that you've earned in the single-player game.

If you're playing Ultimate Ninja 2 solo, you'll most likely spend most of your time in the Ultimate Road mode, which is a basic story mode with a few added role-playing elements. In Ultimate Road mode you play as Naruto, and it's up to you to fight your way through one opponent after another as you follow the storyline of the anime. Between fights you can explore Leaf Village, talk to people, visit the ramen shop, take a gondola ride to the lookout tower, visit the training area, and more. Even though the story is focused on Naruto and you'll usually be controlling only him when not in battle, you won't always be stuck fighting as Naruto. Sometimes you'll get to fight as other characters. For instance, in an early series of fights, after we finished one match playing as Naruto we fought the next match as Shikamaru Nara. Between battles you can also customize your character by allocating points you've earned to attributes such as strength, defense, chakra, and agility. The character customization, world exploration, and heavy use of dialogue and cutscenes between fights all add up to make Ultimate Road mode feel almost like a role-playing game.

Of course, the unique features of Ultimate Road mode are essentially just window dressing for what is still very much a fast-paced, flashy fighting game. The battles are one-on-one fights set in a variety of large, interactive stages. The controls are extremely simple, and even if you don't have any experience with fighting games you shouldn't have any difficulty picking this one up. The circle button is the standard attack button, and by tapping combos and holding the left analog stick or D pad in a direction while attacking you'll pull off different moves. The X button is used for movement, and you can use it to dash around the level, jump through the air, and move between the middle, back, and front planes on each stage. You can pick up and use items by first selecting the item you want to use and then pressing the square button to use it. You can get scrolls, projectiles, and other items that will come in handy during a battle.

The game sounds simple, and for the most part the fights require little more than frantic button mashing. However, there are some spectacular special moves that you can pull off by using magic energy called chakra. By holding down on the D pad you can charge up your chakra gauge, which can be filled a maximum of three times. Once you have enough chakra, you can press a combination of the triangle and circle buttons to unleash an over-the-top special move. When you perform these moves the screen transitions to show the action from various angles, and a sort of minigame is initiated in which you have to enter random button combinations or spin the left analog stick faster than your opponent to inflict large amounts of damage.

When playing as Naruto, we pulled off a special attack called the "New Knockout Move!" in which we had to play a sort of tug-of-war by spinning the left analog stick to get an onscreen indicator over to our opponent's side of the screen. Meanwhile, the opponent is doing the same thing and trying to push the indicator over to your side. When we pulled off this move, Naruto threw a massive ball of energy that tore a deep trench in the ground as it flew toward the opponent. We performed this move on one character and ended up taking off about two-thirds of his health in a single blow.

When you aren't fighting or running around town, you can play minigames in the Ultimate Road mode. There are about six of these games to choose from, and by playing them you can earn ryo that you can spend to unlock various items. To initiate these minigames you simply have to talk to the right characters. We talked to Guy and played a pose challenge in which we had to mimic his moves by memorizing and then entering button combinations that got progressively longer with each round. In another very similar game we did the same thing with Shikamaru. Later we ran a handstand race against Guy in which we had to alternate pressing the circle and square buttons to run on our hands around a track. There were ninja hounds on the track that would attack us if we didn't slow down or speed up at the right time, but for the most part the handstand race and the other minigames were very easy.

There are more than 30 characters to choose from in Naruto: Ultimate Ninja 2, and about 16 different stages. The characters we unlocked weren't terribly surprising and included people like Guy, Rock Lee, Kakashi, Shino, and Ino. But even after spending a few hours with the game, we were still left with a lot of question marks on the character select screen. We'll have to wait until June to see the rest of what Ultimate Ninja 2 has to offer, but until then, you can take a look at the latest screenshots and gameplay movies that have been added to the gamespace. 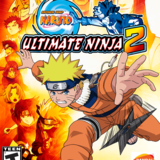