Naruto To Boruto: Shinobi Striker Season Pass 3 Will Open With A Different Version Of Kakashi

The popular Naruto character will return to the team-based fighting game in a new form as the first character of Season Pass 3.

Naruto to Boruto: Shinobi Striker will soon kick off its third Season Pass of new characters, and the first character is a favorite. It's Kakashi Hatake, who, yes, is already in the base game--but this is his double Sharingan form, giving him access to new abilities.

Okay, it's a bit of a seven Gokus in Dragon Ball FighterZ situation--but the trailer, below, shows off Kakashi's moves and fans of the character might be glad to have access to this form.

He'll be the first of five new DLC characters being added, taking the total number of DLC characters for the game up to 23. As a bonus, anyone who buys the Season Pass 3 will also unlock the Lighting Blade action for the lobby.

Season Pass 2 of the game came with nine new characters, so this pass won't be quite as rich.

A price for Season Pass 3 has not been announced yet, but since it has fewer characters, it will likely cost less than the first two (which were $30 each).

Soleil Games, the developer of this title, is due to release Samurai Jack: Battle Through Time soon. It's coming to Switch, PS4, Xbox One, and PC on August 21. 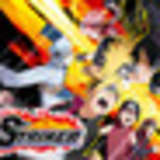