Namco unveils new Mr. Driller for the GBA and GC

The latest installment in Namco's puzzle game series is planned for both the Game Boy Advance and the GameCube.

Namco has announced its plans to release the latest installment in its Mr. Driller puzzle game series for the Game Boy Advance and the GameCube. The GBA version will be titled Mr. Driller Ace, and it will feature the original modes from the previous games in the series, as well as a new "ruins of dridorado" mode. This mode follows a format that is similar to the original mode, except players can acquire items and feed them to creatures called "pacteria." This mode will be similar to many virtual pet games in that players can raise these creatures so that they'll grow into different types of creatures. The GameCube version is tentatively called New Mr. Driller, and it will feature link connectivity with the GBA version.

Mr. Driller Ace for the GBA is slated for a July 12 release, followed by New Mr. Driller for the GC this fall in Japan. A North American release has not been announced for either game. 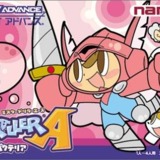