Latest in the Narikiri Dungeon series for the GBA will be revealed in Japanese magazine.

TOKYO--Namco announced today on its official Web site that it will unveil a new entry in the Tales role-playing game franchise this coming Monday. According to reports from early purchasers of next week's Shonen Jump, slated to hit newsstands that day, the game will be the third entry in the Narikiri Dungeon RPG series on the Game Boy Advance.

The Narikiri Dungeon series is known for its system that lets you change your character's costumes to fight with different abilities. For example, wearing a swordsman's outfit will give you the ability to fight skillfully with swords, while switching to a magician's outfit will let you cast various spells. The last series installment, Tales of the World: Narikiri Dungeon 2, was released in Japan in late 2002.

Neither of the previous installments in the Narikiri Dungeon series have been released in the US. 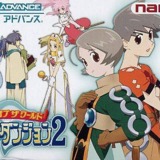