Publisher goes Super Saiyan, grabs five-year exclusive license for games based on license across all major consoles and handhelds.

In fiscal 2008, the Dragon Ball franchise accounted for roughly half of Atari's sales. Beginning next year, that percentage will drop to zero.

Namco Bandai Games America today announced that it has obtained the exclusive North American rights to publish Dragon Ball games on all major consoles and handhelds, starting in January 2010. The deal--struck with rights-holders Toei Animation and FUNimation--will run for a five-year term.

This is not the first indication that Atari's tenure with the license was coming to an end. Last month, Namco Bandai announced that it would be publishing a trio of games based on the Dragon Ball series this fall. The first, Dragon Ball: Raging Blast, will see release on the Xbox 360 and PlayStation 3, while Dragon Ball: Revenge of King Piccolo will be available exclusively for the Wii, and Dragon Ball Z: Attack of the Saiyans will head to the DS. At the time, neither Atari nor Namco Bandai answered GameSpot's questions about publishing rights to the series.

Even before that news, there had been friction between Atari and the Dragon Ball rights holders. FUNimation and Atari fought briefly over the Dragon Ball game license in October 2007, with Atari resolving the issue by extending its licensing agreement for the franchise through January 2010. 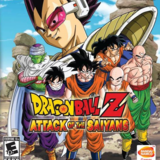