Title to feature characters from manga series One Piece, Dragon Ball Z, and Toriko; out next year for PS3 and PS Vita.

Namco Bandai will be heading back into the manga crossover fighting arena, the company's first foray since Battle Stadium D.O.N for the PS2 and GameCube.

According to a recent reveal from Japanese magazine Famitsu, the publisher's upcoming foray is called Project Versus J. The title is a team-based fighting game where players can pick characters from Shonen Jump manga properties. So far, Luffy from One Piece, Goku from Dragon Ball Z, and Toriko from Toriko are confirmed selectable characters.

The game is slated for a 2013 release on both the PS3 and PS Vita. The last game that featured a huge cast of Shonen Jump manga characters was Jump Ultimate Star for the DS. Check out GameSpot for more information on that past title. 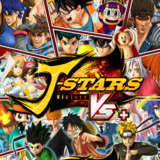