Developed by the former Wipeout crew, Curly Monsters, the jet-racing PlayStation game N-Gen Racing has a lot in common with the racer Wipeout. The style, look, and feel is quite similar to that of the Wipeout title, which first hit shelves in 1995.It would be unfair to say that the developer had no original ideas, but it's interesting to see how the roots can influence a title's development.

The jets in the game are based on F15s, and there are a total of around 40 different jets, each one having different characteristics. There are four categories into which the jets are divided: trainer, fighter, S-Fighter, and X-Fighter. While the trainers are fairly easy to handle (compared with the ones appearing later in the game) and feature no weapons, the X-Fighters aretop-notch jets, and they are recommended to professionals only. Weapons will support you in your goal of reaching first place, but it's not possible to only rely on the weapons to do the job. Developer Curly Monsters clearly focused on racing, and it was a good decision because the company had a good idea of how to make the racing more thrilling than you might imagine. One of the more clever aspects of the game is that you gain more speed the closer you are to the ground. So if you decide to fly at a great height, you will go far too slow to win the race. This forces you to fly as close as possible to the ground, therefore flying the most risky maneuvers since those in Fire Fox - it's an aspect that becomes very apparent in two-player split-screen mode.

The usual batch of game modes are available: arcade for one and two players (including a championship mode for two players), as well as single races. However, the heart of the game is winning in the N-Gen mode, where you need a permit to enter a championship race in a certain class. You qualify for a permit by racing one lap then you can buy a plane and enter the races. In each race, you can earn money, which you can use to purchase new jet. In total, there are 14 tracks that go through world-famous locations.

The weapons includes rockets, machine guns, and other offensive and defensive weapons that help you get rid of the competition. The music is mainly techno and Euro-beat stuff, similar to the music in Wipeout, and perfectly supporting the semifuturistic and already hectic mood of the game.There are two basic control schemes available in this game: an arcade and a pro-control setting. A flight tutorial guides you through the basic control schemes. We recommend starting with the arcade controls since it might be a little too much to start with the professional (and more realistic) handling of the jets in the pro-control setting.

The graphics are impressive, considering the limitations of the PlayStation. The 3D terrains look incredibly detailed, and the jets appear very stylish. There's also no noticeable slowdown when you play the game in two-player split-screen mode. Tracks can also be played at night, which show the side markers of the course blink, making you feel as if you were landing your plane on an airport runway. After Gran Turismo, a new feature has also become fashionable: replays. It appears in almost every racing game now, so it's no surprise that it appears in N-Gen Racing. You can view your race from all kinds of camera angles, and we must admit, the replay mode looks lovely.

N-Gen Racing is filled with excitement and nerve-wracking action, and it's very likely that Curly Monsters can repeat their success with Wipeout and land another hit. We're looking forward to getting the final version of the game. 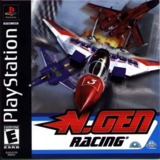