Mythic Entertainment, the veteran developer and publisher of several popular online games, has filed a lawsuit against Microsoft for trademark infringement and unfair competition. The developer and publisher, most recently known for Dark Age of Camelot on the PC, has filed suit in the US District Court for the Eastern District of Virginia in Alexandria. The suit alleges that Microsoft's upcoming online game Mythica and the prerelease publicity for the game infringes on Mythic's name and federally-registered trademark of Mythic Entertainment, which amounts to unfair competition in violation of federal and state law. The complaint alleges that the term "Mythica" is similar to Mythic's registered mark and name, which is likely to cause confusion, mistake, or deception among consumers. Mythic is seeking a permanent injunction, in addition to economic remedies. Mythic Entertainment previously objected to Microsoft's use of "Mythica," but Microsoft refused to stop using the name.

"We have worked hard for eight years to earn our reputation for producing high quality online games, including games that compete successfully with those offered by the biggest corporations in the world, such as Microsoft," said Mark Jacobs, president and CEO of Mythic Entertainment. "The Mythic name and registered trademark are the symbols of that reputation and quality, and they represent the goodwill and recognition we have achieved in the computer game industry and among consumers worldwide."

"We cannot allow Microsoft to usurp our rights, confuse the public, and use the Mythic brand to gain an unfair competitive advantage," added Jacobs.

"We had hoped not to have to resolve this in court, and it is truly unfortunate that Microsoft declined to respect Mythic's rights," Jacobs said. "But our name and mark are among our most valuable assets. We have no choice but to defend them, regardless of the size and power of our adversary. We would expect Microsoft to react no differently if someone launched an operating system called Microsofta, just as Microsoft did when confronted with an operating system called Lindows." 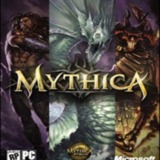