The fifth and final game in the Myst adventure series will be at E3 2005. Get the details here.

The last game in Cyan's long-running Myst series will be on hand at E3 2005, and we recently had a chance to take an up-close look. According to designer and series cocreator Rand Miller, Myst V will be the series' "grand finale, but as you might expect from a Myst game, that means that it will actually be a quiet ending with big repercussions at the end." The game will have two primary protagonists: an elderly D'ni archivist named Esher, and Yeesha, the daughter of Atrus (who has appeared in the recent Myst games in one form or another). Apparently, toward the game's completion, you'll be faced with a crucial decision to choose between these two characters--a decision that will affect how Myst V ends. Both characters will again travel through the fantastical worlds (known as "ages") of Myst, and like in Uru, the game will have a central-hub world to which you'll return, though it will apparently also have a structured, linear progression through these ages.

The new game will be rendered in 3D, similarly to the visually impressive Uru: Ages Beyond Myst, but it will apparently be powered by all-new technology rather than reusing anything from Uru. Miller explains that Myst V will attempt to embrace both old Myst fans and new ones by not requiring anyone to have played any previous entries in the series to understand it, in addition to presenting a highly streamlined first-person interface that can be controlled with the mouse and a single button. Despite that the game is fully 3D, you'll be able to play though it in point-and-click fashion (just like in the original Myst), moving to and from preset nodes. Though if you prefer, you can also unlock the node-based movement so you can walk around freely using your keyboard's W, A, S, and D keys.

We watched a demonstration on a large beachlike area, where Esher paced back and forth, gesticulating expressively. Miller explains that while the bodily animations were motion-captured, the facial animations were "filmed" and superimposed on the polygonal models. Consequently, the effect seems expressive and lifelike, even at this early stage. We watched as Esher traversed the beach holding a stone slate, which is one of the game's all-new features.

In addition to having an in-game camera he can use to take photos of key clues, Esher is a scribe who can etch crucial patterns onto his slate to actually manipulate the world. This will be how he'll solve the game's puzzles and interact with its creatures (rather than using complicated dialogue trees to speak or using a cumbersome inventory system for items). We watched as he approached a small hut on the beach, which prominently displayed a rune that resembled three falling raindrops. Esher then scrawled the same rune on his tablet (using the mouse to draw the pattern), which caused actual rain to fall from the sky, as well as summoned a baboonlike creature to emerge onto the beach to advance the game. However, Miller notes that the slate itself will be a physical object Esher will have to carry with him, so it may encumber his progress. For instance, if he's forced to climb to a great height, he may not be able to do so while holding the slate. Therefore he will have to figure out another way to do so.

When asked about the game's relative difficulty and puzzles, Miller conceded that some of the more recent entries in the Myst series have focused primarily on challenging puzzles. However, the designer noted that there were "basically two kinds of people who played [the original] Myst: explorers and puzzle-solvers." Miller cited the example of the first few areas of the original Myst, which could be traversed without solving any puzzles at all. The designer explained that the purpose of creating different ages in Myst should be to let all players actually get to them. So Myst V should end up "pulling back a little" from focusing entirely on extremely tough puzzles that may alienate those few players who simply want to explore. Myst V looks and sounds like an extremely intriguing game and will hopefully serve as a fitting final chapter for the series. The game is scheduled for release later this year. 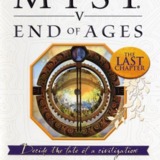