Monkeying around with a good thing is always a dubious proposition. However, EA opted to take that gamble with its best-selling The Sims franchise, creating the kid-oriented spin-off series MySims in 2007. Shedding much of the micromanagement grit of its inspiration, MySims and its sequel MySims Kingdom transitioned Will Wright's creation into a lighter atmosphere, in which building cities and decorating households became the focus.

Now, EA will be branching out the MySims franchise even further from its roots, given that the publisher announced today two new series games that tinker with an already altered formula. Titled MySims Party and MySims Racing, both games will be released for the Nintendo DS and Wii in 2009.

As its title implies, MySims Party for the Wii offers a collection of minigames tailored to a gathering of friends. The game features 50 minigames in all, and players will compete in challenges ranging from snowboarding to escaping robots to dancing. Adding a wrinkle to the proceedings, each MySims character has individual ratings for endurance, speed, and luck. The DS edition of MySims Party offers gameplay similar to its console counterpart, though the minigame count has been paired down to 40.

Also true to its title, MySims Racing on the Wii lets players compete against up to three others in a variety of racing challenges. EA promises a plethora of customization options for the game's vehicles, letting players tweak chassis, paint coatings, and accessories, as well as improve their rides with under-the-hood upgrades. The DS edition of MySims Racing features a similar experience, letting up to three players compete locally through the handheld's built-in Wi-Fi. 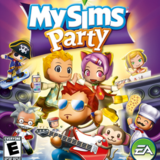